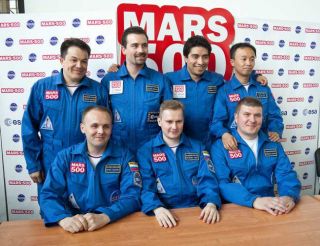 The six-man crew of the Mars500 mission is getting set to "land" on the Red Planet next month. (Seven crewmembers are shown here; one serves as a backup for those inside the mock capsule.)
(Image: © IBMP/Oleg Voloshin)

A 520-day mock mission to Mars is nearing its halfway point, with its crew of volunteers preparing for a simulated "landing" on the Red Planet next month.

The Mars500 mission — a joint experiment by Russia, the European Space Agency and China — "launched" last June, and its six crewmembers have now spent more than 230 days locked in a windowless spaceship simulator in Moscow.

The six men are due to "land" on Mars on Feb. 12, according to a Jan. 21 report by the Associated Press. The crewmembers will spend two days pretending to explore the planet's surface, and then they'll head back to Earth.

All in all, their confinement should last more than 500 days, officials have said — hence the mission's name.

Mars500 managers have announced that the crewmembers — three Russian men, two European men and one Chinese man — are holding up well so far, the Associated Press reported. None of the six has plans to abandon the experiment, open the hatch and breathe some fresh air anytime soon.

"They are still motivated, but there is a certain fatigue, which is natural," the AP quoted Mars500 mission director and former cosmonaut Boris Morukov as saying.

The main goal of the experiment, which is being held at the Institute for Biomedical Problems in Moscow, is to help prepare future astronauts for the rigors and stresses of a long trip in space. A roundtrip journey to Mars, example, would require about 500 days of space travel.

Such extended confinement would likely prove taxing to space travelers, and the Mars500 experiment seeks to study how crewmembers could best cope, both psychologically and physiologically.

The six astronauts share living quarters that are about the size of a city bus, according to the AP, though separate experimentation and exercise modules give them a bit more room to stretch their legs. The crewmembers communicate with Earth using e-mail and video messages, which are sometimes delayed to simulate the lag that would occur on a real journey to Mars.

The crewmembers are each being paid about $97,000 to participate in the mission, the AP reports.

Once they leave Mars and head for Earth, they'll be in the home stretch — but that home stretch will be long, trying and anticlimactic, perhaps posing the biggest challenge of the experiment, officials said.

"It will be very tough on the boys because of the monotony," the AP quoted Morukov as saying. "The fatigue and the thought that the mission is over can be fraught with negative consequences."