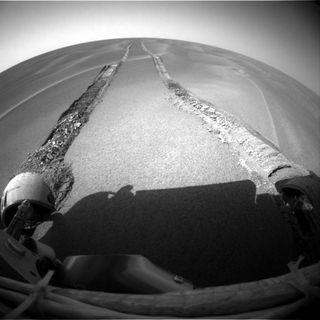 NASA's Opportunity Mars rover has run into a sandy snag. All of its six wheels have sunk in deep into a large ripple of soil.

Rover operators are optimistic they can extricate the robot from its jam, having gotten dug in before. But ground controllers will need time to wheel back on top of the soil again.

Time will also be spent figuring out what's different about the soil that has bogged down Opportunity, hoping to keep this problem from occurring down the road.

The Mars machinery had been cruising southward across the open parking lot-like landscape of Meridiani Planum, full of larger and larger ripples of soil. Opportunity has been en route to its next stopover, Erebus crater, nestled inside an even larger crater known as Terra Nova.

"A note to all you Opportunity fans: Get used to the current scenery, because we're going to be here awhile," said Steve Squyres, lead scientist on the Mars Exploration Rover effort at Cornell University in Ithaca, New York. "We are very optimistic that we'll be able to get out of here, but we're really going to take our time doing it."

Squyres said the first rule in this case is "do no harm" - and that means don't rush anything.

"We're going to take lots of pictures of all the terrain around the vehicle, to get a very complete picture of the situation. We're going to do lots of testing with the rovers that we have on the ground to simulate the situation on Mars. This testing will be aimed not just at finding a plan that will work, but at finding the very best plan that will work," Squyres explained in a Cornell rover web site.

One possibility is trying a number of small maneuvers with the robot at first. That information-gathering could then lead to even more testing.

"All of this is going to take a lot of time. But this is a very precious vehicle up there, in excellent health, and there's no reason to rush anything," Squyres said. The main message now, he added, "is to be very, very patient."

Prior to the rover run-a-muck, Mars rover scientists noted that Opportunity had made yet a new discovery. Two small craters were found on the plains of Meridiani - both less than half an inch deep and clearly visible in snapshots taken by the rover's navigation cameras.

The two tiny craters were a surprise find, said Matt Golombek, a principal scientist on the Mars Exploration Rover mission at NASA's Jet Propulsion Laboratory (JPL) in Pasadena, California. "These are the smallest craters yet seen on Mars," he explained in a JPL-released statement.

"Given that these two craters haven't been covered by sand even though they are surrounded by sand ripples on a flat plain lends support to the idea that they're fairly recent," Golombek said. "Of course, recent might mean any time from yesterday to 100 million years ago."

Cause of the impact craters? They could have been created by an object from space that was large enough to make it through the martian atmosphere without burning up. Alternatively, the tiny craters could be the result of falling rock fragments ejected from a larger crater that formed when something crashed into the martian surface.

While engineers wrestle with Opportunity's show-stopping sand trap, sistership Spirit is busy at work on the other side of the planet surveying the Columbia Hills within Gusev Crater.