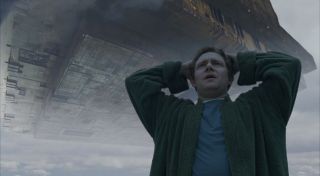 Arthur Dent (Martin Freeman) loses his house and his home planet in the film adaptation of Douglas Adams' Hitchhiker's Guide to the Galaxy.
(Image: © Touchstone Pictures.)

It isalmost impossible not to feel the tremendous, overwhelming affection thatinundates every iota of every millimeter of The Hitchhiker's Guide to theGalaxy.

From the firststrike of the big band-like musical revue of dolphins escaping an imperiledEarth to the final fade-to-black simply embellished with "For Douglas," thereis a warmth and respect for the material that is practically palpable.

The cetaceanextravaganza, "So Long and Thanks for All the Fish," set to music by composerJoby Talbot with lyrics from director Garth Jennings, has to be the cheeriest funeralsong for a doomed planet, especially one whose entertainment industry hasdecreed all blockbusters be consigned the bloated landscape of flash without substance.

Jennings,producer Robbie Stamp and company, however, have managed an unostentatiouslyfitting tribute to late Hitchhiker's author Douglas Adams, who died of aheart attack shortly after he finished a second draft of the screenplay in2001, by skimping on too many CGI bells and whistles and choosing instead totell Adams' story with a combination of old-school special effects andanimatronics.

Whatfollows is a gloriously surreal, and sometimes just plain silly, romp acrossthe galaxy that manages to dive into the deeper philosophical questions we mayall have pondered at one time or another. For instance, what does a 50-foot-longsperm whale--formerly a nuclear missile--think about when it's plummeting tothe surface of a planet below?

At theopening of Hitchhiker's, which opens Friday at theaters nationwide, we find ourprotagonist, English everyman Arthur Dent (played by Martin Freeman, who alsoplays English everyman Tim on BBC's The Office) trying to prevent his housefrom being demolished--to make room for a bypass--by lying in front of abulldozer, clad in nothing but his pajamas and bathrobe.

In anironic twist of fate much favored by the universe, Earth is targeted--at thatexact moment--for destruction so a hyperspace freeway can be built. Luckily forArthur, his best friend, Ford Prefect (Mos Def)--who happens to be an alien--comesto the rescue, hitching them both a ride on a passing spacecraft while sheepstampede in terror across fields and the rest of us lie down on the floor ofa nearby pub with paper bags over our heads.

Armed withnothing but a towel and the eponymous Guide, which provides helpfulexplanations to this brave, new universe in the form of animated sequences andvoiceovers by Blackadder alum Stephen Fry, Ford and an appropriatelybewildered Arthur join up with the narcissistic two-headed President of theGalaxy Zaphod Beeblebrox (Sam Rockwell), Marvin the Paranoid Android (played byWarwick Davis and voiced by the deliciously deadpan Alan Rickman) and the onlyother surviving Earthling, Tricia Macmillian, who prefers the morespace-sounding "Trillian" (Zooey Deschanel), on a cosmic quest for the answerto Life, the Universe and Everything. (Actually, they know the answer--it's 42-- it's the Ultimate Question they're after now.)

To furthercomplicate things, their ship, Heart of Gold, is stolen--by our RichardBranson-meets Bill Clinton-meets Elvis galactic president, no less-- with afleet of very ugly aliens in hot pursuit wielding fatally bad poetry. Heart ofGold is powered by an Infinite Improbability Drive that allows the spaceship tocross vast distances in a blink of an eye, but renders the ship and its humanand not-so-human contents to shape-shift into all kinds of, well, infinitely improbableobjects--a too-brief scene where our anti-heroes transform into knitted versionsof themselves is a particular visual treat.

It's taken overa quarter of a century for Adams' cultural phenomenon to make its silver screendebut, but if we are experiencing a sort of renaissance in British sci-fi, wewould never know it on this side of the Pond.

The BBC's DoctorWho, which coincidentally Adams also wrote scripts for, is back on the tubeafter a 16-year drought, but remains unavailable to American audiences due tolack of interest on the part of the networks. Still, the genre is nothing ifnot tenacious.

Hitchhiker'sfirst started outas a radio play on BBC radio in 1978, then developed into a bestselling novel,a five-part "trilogy," a television series, a computer game, all the whileamassing fans such as theoretical physicist Stephen Hawking and DarwinistRichard Dawkins.

Whilepurists may cry foul at some of the tweaks the movie has made to the book'soriginal plot, producer Robbie Stamp has made it clear that Douglas never meantfor Hitchhiker's to be a static, singular work, "but something that wasable to shift and change into different incarnations in different media anddifferent times." New elements which Douglas designed for the movie, includingthe Point of View gun and the quite insane intergalactic prophet/missionaryHumma Kavula (John Malkovich), have also been brought to life.

Asaudiences prepare to be deluged by summer blockbusters groaning under theweight of their own hype and conceit, do yourself a favor and watch thisunpretentious gem of a movie.

Then, goand read or re-read the book that started it all, and join the ranks of themany who already know why a towel is just about the most useful thing aninterstellar hitchhiker can have--and that anyone who can travel the expanse oftime and space, win against terrible odds, and still find his towel, is clearlysomeone to be reckoned with.