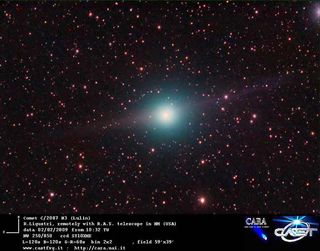 This image of comet Lulin was made Feb. 2, 2009 by Rolando Ligustri using the RAS Observatory in New Mexico. The green ball is the comet's atmosphere, or coma, measuring about 311,000 miles (500,000 km) wide, or three times the diameter of Jupiter. The coma contains cyanogen (CN) and diatomic carbon (C2), two gases that glow green when exposed to sunlight.
(Image: © R. Ligustri (www.castfvg.it), RAS Observatory, used with permission)

During the next few weeks, a comet bright enough for observation in binoculars and possibly even with the naked eye will provide a fine skywatching target when weather permits.

Comet Lulin will be closest to Earth on Feb. 24 and prime viewing will occur than and on surrounding nights. For sharp-eye viewers with dark, rural, skies, the comet is expected to be visible as a dim, fuzzy star.

People living in cities and suburbs are not expected to see the comet with the naked eye, but binoculars and telescopes will reveal its cloudy head and perhaps a striking tail, too. Comets are unpredictable, however, so it's impossible to say how bright this one might become.

Already Lulin is an enjoyable target for small telescopes, producing several striking photographs in the predawn sky. The object is best found using a sky map tailored to your location.

The comet was photographed by Chi Sheng Lin using a 16-inch telescope at the Lulin Observatory at Nantou, Taiwan on July 11, 2007.  But it was a 19-year old student, Quanzhi Ye at Sun Yat-sen University in Mainland China who first recognized the new object on three images that were taken by Lin.

Initially it was thought to be an asteroid, new images taken a week later revealed the telltale presence of a faint coma.

The discovery was part of the Lulin Sky Survey project to explore the various populations of small bodies in the solar system, especially objects that possibly could pose a hazard to the Earth.  As such, the comet has been christened Comet Lulin, more formally known to astronomers as Comet C/2007 N3.

This comet is the brightest since the surprising outburst of Comet Holmes more than 15 months ago and in the coming weeks will become favorably placed in the evening sky. During mid-to-late February it will probably be about magnitude 5 or 6, making it perhaps visible to the naked eye in dark, rural locations and easily observable in binoculars or small telescopes.

Brian Marsden of the Smithsonian Astrophysical Observatory has calculated that Comet Lulin passed through the perihelion point of its orbit (its closest approach to the sun) on Jan. 10, 113 million miles (182 million kilometers) from the sun.  However, while the comet is now receding from the sun, its distance from the Earth is decreasing, with a minimum of 38 million miles (61 million kilometers) on Feb. 24.

For this reason, the comet should be at its brightest during the last week of February; then it will fade fast by mid-March.

The orbit of Comet Lulin is very nearly a parabola, according to Marsden.  It is also rather unusual since it is moving through space in a direction opposite to that of the planets at a very low inclination of just 1.6-degrees from the ecliptic.  As such, because it is moving opposite to the motion of our Earth, the comet will appear to track rather quickly against the background stars as one observes the object from one night to the next.

In addition, over the next three weeks, the comet will appear to rise an average of about 20-minutes earlier each night. Right now, it is best seen in the predawn sky.

On the night of Feb. 7, for instance, Lulin will rise above the east-southeast horizon around midnight and will appear at its highest in the sky toward the south at the break of dawn.  But on the night of the 24th, when it will be passing nearest to Earth, Lulin will be visible all night, rising in the east at dusk, peaking high in the south shortly after midnight and setting in the west around sunrise.

Currently located in the constellation Libra, Comet Lulin will appear to move on a northwest trajectory, crossing over into Virgo on Feb. 11 and passing 3-degrees north of the 1st-magnitude star Spica in Virgo on Feb. 16 (for comparison, your clenched fist held at arm's length measures about 10-degrees in width).

On the night of Feb. 23, now virtually at its peak brightness, the comet will be sitting just 2-degrees south-southwest of the planet Saturn, which you can use as a benchmark to locate the comet.  Moreover, around this time, Comet Lulin will be racing at more than 5-degrees per day -- that's roughly the equivalent of the distance between the stars Dubhe and Merak, the "Pointer Stars" of the Big Dipper; so even a few minutes of watching with a telescope should reveal the comet's slow shift relative to background field stars.

On Feb. 27, the fading comet will slip just 1-degree south of the 1st-magnitude star, Regulus in Leo.  And come the night of March 5, Lulin -- by then probably between magnitudes 6 and 7 and no longer visible without binoculars or a telescope -- will pass to within 2-degrees of the famous Beehive Star Cluster in Cancer.

Comets are visible because radiation from the sun releases gas and dust from the comet. That material then shines with reflected sunlight, creating a cloudy head, or coma, and sometimes one or two tails.

Even when it's at its very brightest, naked-eye observers probably see Comet Lulin as resembling only a dim, fuzzy star.  In binoculars, or a small telescope the comet may resemble an apple on a stick; that is, the comet's diffuse head or coma should appear round and somewhat condensed toward its center, with perhaps a tinge of blue or green, while a narrow tail of gas extends out to the northwest.

In addition, telescopic observers should also look for a "spike" of light, pointing in a direction opposite to the tail.  This strange effect, called an "antitail," is caused by a thin sheet of dust that is expelled by the comet but normally is visible for a brief interval when the Earth passes through the comet's orbital plane.

But because Earth will remain in the comet's orbital plane through February and on into March, there will be an ongoing chance of catching a glimpse of the antitail as well.