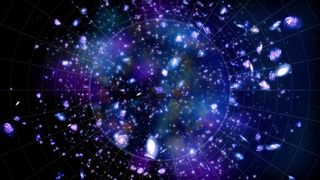 Paul M. Sutter is an astrophysicist at Stony Brook University and the Flatiron Institute, host of Ask a Spaceman and "Space Radio," and author of "Your Place in the Universe." Sutter contributed this article to Space.com's Expert Voices: Op-Ed & Insights.

It was a big moment for our cosmos when the first stars awoke, but it's an elusive one for scientists.

In new research, however, a team of astronomers has identified some of the oldest galaxies ever seen. These objects were already fully formed when the universe was just 680 million years old, according to the scientists, who also found evidence that these galaxies were flooding their surroundings with extreme ultraviolet radiation.

That flood formed gigantic bubbles, where the neutral gas became energized and ionized, offering astronomers the first direct image of a major transformational epoch in our universe.

A long time ago, there wasn't a single star shining across the universe. In the early days of our cosmos, everything was pretty uniform: just about the same average density from place to place. A bit boring, really.

It was also depressingly neutral, quite a change from the first days of the universe. Even earlier, in the first few hundred thousand years after the Big Bang, our universe was so dang hot and dense that it was plasma; the constant cheek-to-jowl jostling had ripped apart atoms into their constituent electrons and nuclei.

But all that chaos ended when the universe turned a ripe old 380,000 years old. That's when things were spread out enough, and the temperatures were low enough, for the electrons to combine with their nuclear families and form the first atoms of hydrogen and helium. With that event came the release of a tremendous amount of radiation that we still know and love today: the cosmic microwave background.

For millions of years, the universe hung around in this state of quiet neutrality. But as the universe expanded and cooled, tiny seeds began to form; patches of that gas were, by random chance, slightly denser than their surroundings. That minuscule enhancement gave them a tiny gravitational edge, drawing material from their neighborhood onto them. Because they had grown, they had an even greater gravitational influence, pulling more material onto them, and so on.

Bit by bit, over eons, the first stars and galaxies grew in the silent, dark, neutral universe.

We don't know exactly when the first stars formed, but we know that when they did, they did so in a big, fantastic way. That's because the universe isn't neutral anymore — it's ionized.

Most of the material that you interact with daily is made of complete atoms; all of the nuclei are dutifully surrounded by shells of electrons, whizzing about and combining with each other in the wonderful, complicated dance that we call chemistry.

But this situation is unique. By far, the vast majority of matter in the universe today is a plasma, the same state it was in long, long ago, electrons and nuclei free to live their separate lives. The sun? Plasma. Other stars? Plasma. Nebulae? Plasma. The stuff between all the stars and nebulae? Plasma.

When our universe was 380,000 years old, it transformed from plasma into a neutral gas. Today, over 13 billion years later, it's mostly plasma again. Something must have happened; something must have ripped apart all those atoms in the universe. And considering that we observe the universe to be plasma as far back as we can look, to some of the first stars and galaxies to appear on the cosmic stage, whatever caused this "reionization" must have happened pretty early on.

Astronomers think the extreme ultraviolet radiation pumped out by the first generation of stars (and their deaths as supernova explosions) turned our universe back into plasma. But, frustratingly, we don't know exactly when. Even our most powerful telescopes and deepest surveys don't have the ability (yet) to peer back that far into the universe. We can clearly see the cosmic microwave background, and we can clearly see the universe as it is today, but the middle bits are currently a cosmological mystery.

But that situation is beginning to change. The hunt is on for older and older galaxies, along with surveys of the gas in their surroundings, as we try to get a handle on this important pubescent phase in the growth and evolution of our universe. Recently, an international team of researchers found three galaxies that are extremely faint, incredibly small and mind-bogglingly distant.

These diminutive galaxies were already fully formed and operating when our universe was just 680 million years old. That isn't surprising — we've found galaxies that old before — but in this study, the researchers added a new wrinkle: By examining the radiation emanating from the environment near the trio, they discovered that the galaxies had already begun to blow bubbles of ionized plasma into their surroundings.

In other words, the radiation pumping out of the galaxies had already begun to transform the universe around them, like the pimples on the forehead of a teenager. This is the first clear sign of the epoch of reionization in progress. And while astronomers had deduced that the universe had finished reionizing by the time it hit its first billionth birthday, nobody suspected that it could happen this early.

These galaxies make excellent targets for the upcoming James Webb Space Telescope, which is specifically designed to study this era of our cosmic history. If the result holds up and more examples of reionization are found, we might finally be able to understand this transformative epoch from our universe's ancient, violent past.

The research is described in a paper posted to the preprint server arXiv.org on Jan. 7.