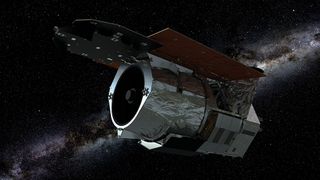 The Wide Field Infrared Survey Telescope (WFIRST) is NASA's next flagship telescope. Expected to launch in the mid-2020s, this instrument will give astronomers a clearer and more expansive view of the universe than ever before, with the ultimate goal of answering some of the biggest mysteries in space. [8 Baffling Astronomy Mysteries]

The telescope will feature a 2.4-meter-wide (7.8 feet) mirror and a 300-megapixel camera, allowing the observatory to capture in one shot an area 100 times larger than NASA's Hubble Space Telescope can, with identical high resolution.

The WFIRST telescope is one of two spy telescopes given to NASA by the National Reconnaissance Office (NRO) in 2012. The telescope is being repurposed for scientific use for NASA by L3Harris, an aerospace technology company, and Ball Aerospace, a spacecraft and payload developer that has contributed technology to Hubble and NASA's Spitzer Space Telescope.

Long ago, the universe was expanding a lot more slowly than it is today, and it seems like it will expand even more rapidly with time. The Hubble telescope discovered that by observing distant, ancient supernovas.

But what is causing that acceleration of the expansion of the universe? Scientists aren't yet sure, but they think it has something to do with dark energy. Although we know that dark energy makes up about 68% of our universe, we don't know what it is — only what it does to the universe. The rest of the universe is made up of dark matter (27%) and visible matter (5%), which includes us and everything we can see, taste, hear or touch.

Enter WFIRST. The telescope will perform a number of measurements to help scientists study the evolution of dark energy since the Big Bang. WFIRST's work will include creating a precise map of the change in the distribution of galaxies over time, looking for supernovas and measuring their distance away from us, and measuring the shape of very large galaxies and galaxy clusters. All of these measurements will help scientists understand how dark energy has evolved, which is key to understanding why the expansion of the universe seems to be accelerating.

Beyond helping us answer some of humanity's most enduring questions, WFIRST will also help scientists spot planets orbiting other stars in our galactic neighborhood. These exoplanets are numerous. NASA's Kepler Space Telescope mission, which operated from 2009 to 2018, found more than 2,600 exoplanets orbiting stars outside our solar system.

WFIRST will expand that search to look for planets as far away as we can imagine — thousands of light-years away, near the center of the Milky Way galaxy. One technique WFIRST will use is called microlensing. This method takes advantage of Albert Einstein's theory of general relativity, which showed us that gravity can appear to bend light waves at great distances.

When one star in our foreground passes near a background star (from our perspective), the background (or source) star's light is bent around the foreground (or lensing) star. That bent light magnifies the lensing star, making it appear much bigger to us on Earth. And if that lensing star has planets, those planets also perceptibly bend the source star's light. With a slew of calculations, scientists can then figure out such a planet's mass, orbit and orbital period around the lensing star.

WFIRST will also test coronagraphy techniques for direct imaging of exoplanets. Because exoplanets are so much dimmer than the stars they orbit, they're incredibly difficult to spot by just taking pictures. A coronagraph is an optical instrument that suppresses starlight, making it possible for those exoplanets to appear in images. Using this technique, WFIRST can study an exoplanet's structure, composition or even atmospheric chemistry — aspects of a planet that scientists need to study to understand whether that world is potentially habitable.

Correction: This article was updated on July 17, 2019 to add that L3Harris is also involved with development and construction of WFIRST.