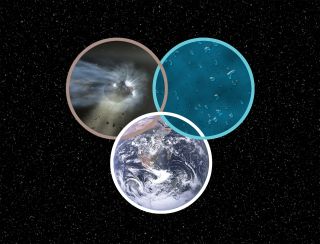 Fresh observations of Comet 46P/Wirtanen, which swung by Earth in December 2018, suggest that more of Earth's water came from comets than previous studies suggested.

How Earth got its oceans is a field of active debate. While comets are icy bodies that contain water, previous studies showed that the ratio of elements in many comets' ice is different than elements contained in terrestrial water. But in the absence of comet deliveries, it's hard to say where Earth's water came from.

"According to the standard theory, the Earth is thought to have formed from the collision of small celestial bodies known as planetesimals," officials from the French space agency CNRS, which participated in the research, said in a statement. "Since such bodies were poor in water, Earth's water must have been delivered either by a larger planetesimal, or by a shower of smaller objects such as asteroids or comets."

Researchers use a metric called isotopic ratios to learn what kind of water lies in different space objects, particularly the ratio of deuterium (a heavier form of hydrogen) to hydrogen. So far, studies of comets indicated this "D/H ratio" (as scientists call it) of comets was three times that of ocean water on Earth. This implies that comets crashing into Earth provided only 10% of our planet's water.

But this new study, based on observations of Comet 46P/Wirtanen in December 2018, shows that the family of comets it belongs to,  known as "hyperactive comets," has water with a similar D/H ratio as water on Earth. But the research gets even more intriguing when taking into account how comets lose ice as these frigid bodies draw closer to the sun.

Most comets originate in an area of the solar system known as the Oort Cloud, a region of icy objects beyond the orbit of Neptune. Occasionally, a gravitational perturbation — perhaps a star passing by at some distance — moves one of these bodies closer to the sun. As the comet approaches the sun, the cometary ice sublimates, or passes directly from a frozen form into a gas. Often this sublimation produces a large tail that stretches for thousands of miles, or kilometers.

Researchers examined Comet 46P/Wirtanen to see what happened as it drew close to the Earth (and the sun) in December 2018. They used the SOFIA airborne observatory, which is carried aboard a Boeing aircraft that flies above much of Earth's atmosphere — providing a better view of space objects.

As a "hyperactive" comet, 46P releases more water than what is available on the surface of the comet's nucleus. That's because 46P has a lot of ice-rich particles in its atmosphere that have previously been released from the nucleus, according to a statement from SOFIA. These particles melt as the comet draws closer to the sun, just like the comet's surface does.

The new study gave more insight into why hyperactive comets have isotopic ratios similar to Earth water. Specifically, the researchers discovered a correlation between the comet's D/H ratio and its active fraction — that is, the fraction of the nucleus service needed to provide the water in the comet's atmosphere. Scientists found that the more hyperactive a comet is, the more its D/H ratio resembles Earth water — so comets that produce more water vapor from ice-rich atmospheric particles than from their nucleus have water more like Earth's.

"If this hypothesis is correct, the water in all cometary nuclei may in fact be very similar to terrestrial water, reopening the debate on the origin of Earth's oceans," the research team added in the CNRS statement.

A study based on the research was published March 26 in the journal Astronomy and Astrophysics. The research was led by Dariusz (Darek) Lis, a scientist at NASA's Jet Propulsion Laboratory who also is affiliated with the Paris Observatory.