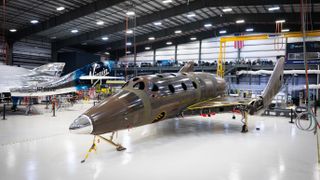 Virgin Galactic's next SpaceShipTwo vehicle has notched another construction milestone.

The six-passenger spaceliner just deployed its landing gear and carried its full weight on its wheels for the first time, Virgin Galactic representatives announced today (Jan. 8).

All of the major structural elements of the spacecraft — which is being built at the Mojave, California, facilities of Virgin Galactic subsidiary The Spaceship Company — have now been assembled, Virgin Galactic representatives added.

"With the spaceship now capable of bearing its own weight, the assembly team is hard at work connecting the vehicle’s integrated systems, including the flight control systems from fuselage to tail booms, as well as completing the final structural closeouts," Virgin Galactic representatives wrote in an update today.

"As this work is completed, the spaceship will be positioned in the hangar for the start of integrated vehicle ground testing, which will verify the integrity of all systems," they added. "This step is a precursor to the start of its flight test program."

Virgin Galactic already has one SpaceShipTwo vehicle in the latter stages of flight testing — VSS Unity, which has completed two piloted demonstration missions to suborbital space and back. Unity is also in Mojave at the moment, getting a touch-up before being transported to Spaceport America in New Mexico, the center of Virgin Galactic's commercial operations. Unity will wrap up its test campaign at Spaceport America and then begin flying paying customers from the site, perhaps sometime this year.

Those customers will experience a few minutes of weightlessness and get to see the curvature of Earth against the blackness of space. A ticket currently costs $250,000, and more than 600 people have put down a deposit to reserve a seat, Virgin Galactic representatives have said.

The company's hangar at Spaceport America is big enough to house five SpaceShipTwo vehicles and two WhiteKnightTwo carrier planes simultaneously. (WhiteKnightTwo totes the spaceliner up to an altitude of about 50,000 feet, or 15,000 meters. At that point, SpaceShipTwo separates and fires up its onboard rocket motor, making its own way to suborbital space.)

Virgin Galactic is building a fleet of vehicles to fill that space. Indeed, a third SpaceShipTwo is under construction at Mojave as well, and its assembly is about 50% complete, company representatives said.

"We now have two spaceships that are structurally complete, with our third making good progress," Virgin Galactic CEO George Whitesides said in today's statement. "These spaceships are destined to provide thousands of private astronauts with a truly transformative experience by performing regular trips to space."