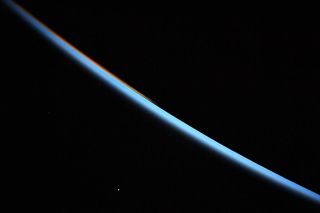 A view of Venus from ISS during sunrise.
(Image: © NASA)

A photo of Earth at sunrise shows Venus, our closest neighboring planet, shining in the distance above Earth's shimmering blue horizon.

The image was captured by NASA astronaut Christina Koch from aboard the International Space Station (ISS).

Venus is the second planet from the sun, and it shines brighter than any other planet in the night sky. The blue hue seen in the picture is sunlight refracting in our planet's atmosphere.

A separate time-lapse video posted by NASA on June 3 shows an aerial view of Earth during a sunset as seen from the ISS. Since the station orbits around our planet every 90 minutes, the astronauts on board get to take in this view of the sunset 16 times a day, according to NASA.