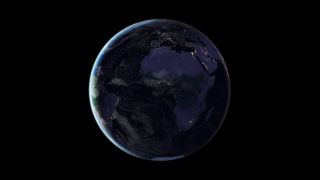 Miguel Román is the sort of person whose family barbecues are interrupted by calls from Army personnel asking where they should bring generators when a hurricane strikes.

He is also the director of the Universities Space Research Association's new Earth from Space Institute, which is designed to use space technology to help people during every stage of a disaster, from preparedness to recovery. This is a challenge that's only becoming more complicated as climate change continues to shape natural disasters around the world.

"People want our space agencies to study and focus more on climate change impacts," Román said. "And so if you have an organization that has been in the space community for 50 years, the writing is on the wall: We really need to change the way we do business in the Earth sciences."

Satellites already do plenty of work tracking what's happening on the ground, particularly when a disaster begins. A fleet of weather satellites monitors storms and maps burn scars; radar satellites can measure how earthquakes distort the ground; infrared instruments can spot lava flows. But every satellite and every government agency ends up with a slightly — or dramatically — different picture of an unfolding disaster.

"We have 50 flood maps, and we don't know which one is right," Román said. "Right now, we're swimming in data. [Acquiring data is] not the problem. The problem is, how are you contextualizing those layers."

For Román, context comes from the technology he's spent a decade developing. Called the Black Marble, it monitors electric lights at night, which makes it a versatile way to tackle disaster preparedness, planning, mitigation and recovery, despite the vagaries of individual situations. Román got a firsthand taste of how personally valuable such a technique can be in 2017, when Hurricane Maria struck Puerto Rico, where he grew up and where his grandmother still lives.

"[The Black Marble] means that we're not just seeing the lights coming from the Luxor Hotel in Las Vegas, which is superbright," Román said. "It means that I get to detect my grandma living in the coffee-growing region of Puerto Rico." The technology can also help experts track the movement of refugees fleeing Syria and the flooding of Army compounds.

But when it comes to resilience, working with communities before a disaster could be more valuable than addressing the problem after disaster strikes. As part of his work with Hurricane Maria, Román ran simulations of how the storm would have affected the island if, instead of coal-fired power plants, Puerto Rico had relied on energy sources that weren't as reliant on the electrical grid. In those simulations, power outages on the island lasted 2.5 months, rather than over a year as they did in reality.

And other energy sources could prevent some future suffering as well, by replacing carbon-based power with greener energy sources, Román said. Human-caused climate change can interact with disasters like wildfires, hurricanes and floods and can weaken communities before disaster strikes by harming human health and food supplies.

"You have these disasters, but the real disaster is our contributions to carbon emissions, our methane emissions," Román said.