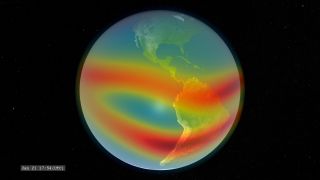 NASA's twin E-TBEx cubesats will study how charged particles in the ionosphere, shown in this visualization, affect satellites.
(Image: © NASA)

NASA will be launching two identical miniature satellites next week as part of a project designed to help scientists understand how Earth's atmosphere muddies the radio signals we rely on for communication and navigation.

The pair will be among a total of 24 satellites launching aboard SpaceX's Falcon Heavy rocket as it soars into space for the third time, with a launch date currently scheduled for June 24 after some delays. The two identical spacecraft are cubesats, which are miniature satellites originally used only in low Earth orbit but are now sometimes used for interplanetary missions.

These twin satellites, called E-TBEx, short for Enhanced Tandem Beacon Experiment, will stay close to home. As they orbit close to Earth, they'll provide scientists with essential information about how radio signals can be disrupted as they pass through the planet's upper atmosphere.

Earth's ionosphere, a layer in the upper atmosphere that is bombarded by solar and cosmic radiation and therefore full of charged particles, contains "structured bubbles." These bubbles can distort radio signals, interfering with military and airline communications, as well as GPS signals, NASA said in a statement, particularly over the equator.

As we learn more about these bubbles, we'll be able to avoid the signal problems they cause, according to NASA. But right now, scientists don't know when the bubbles will form or how they'll change over time. "These bubbles are difficult to study from the ground," Rick Doe, payload program manager for the E-TBEx mission, said in the statement. "If you see the bubbles start to form, they then move."

NASA's hope is that the E-TBEx satellites will be able to study the evolution of the bubbles before they begin to distort radio waves, Doe said. That would help scientists better understand the underlying physics of the bubbles.

Scientists already know those physics have something to do with the ionized particles in this layer of the Earth's atmosphere. Particles in the ionosphere are separated into a "sea of positive and negative particles, called plasma," NASA said in the statement. The plasma is mixed with neutral gases like the air we breathe.

The complex recipe means that Earth's upper atmosphere and the bubbles that form there respond to several different factors, including electric and magnetic fields and both terrestrial and space weather. Scientists believe that pressure waves from large storm systems can reach up into the ionosphere and create winds that can shape how the bubbles move and form. The charged particles of the plasma would also be affected by space weather, which can affect electric and magnetic fields.

The twin E-TBEx satellites will send radio signals at three frequencies, all close to those used by communications and GPS satellites, according to NASA. Those signals will be sent to receiving stations on the ground, allowing scientists to detect tiny changes in the signals' phase or amplitude. Scientists will then be able to map the disruptions back to the region of the ionosphere they passed through.

"All signals are created at the same time — with the same phase — so you can tell how they get distorted in passing through the bubbles," Doe said. "Then, by looking at the distortions, you can back out information about the amount of roughness and the density in the bubbles."

The two satellites aboard Falcon Heavy are joined by similar beacons onboard NOAA's six COSMIC-2 satellites. A combination of measurements from all eight satellites will allow scientists to study the distortions from multiple angles simultaneously.

Scientists hope that the project will help them develop strategies to avoid signal distortion. For example, NASA said, airlines could potentially choose a radio frequency for communications that is less susceptible to influence from the bubbles or the military could postpone an important operation until a disruptive ionospheric bubble has passed.

Visit Space.com on June 24 for complete coverage of the SpaceX Falcon Heavy rocket launch and the payloads on board.