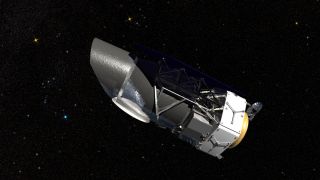 This isn't the first time the Trump administration has tried to nix WFIRST, a $3.2 billion flagship-class astrophysics mission that has already had to grapple with budget cuts. In its fiscal year 2019 budget proposal, the Trump administration sought to end that mission along with five other Earth science missions — but the Senate voted to give WFIRST the funding it needed to stay on track for a launch in 2025.

According to NASA's summary of the budget request, the Trump administration is proposing "to terminate the WFIRST mission and instead focus on completing the delayed James Webb Space Telescope," another flagship-class project that is over budget and behind schedule.

PACE and CLARREO were two of the five Earth science missions that also escaped the chopping block last year. Congress voted to fund them after President Trump's 2019 budget request suggested NASA terminate them. Both were top-tier recommendations from the National Research Council's 2007 Earth Science decadal survey.

On the other hand, the administration is now proposing to restore funding to two other Earth science missions that it tried to axe last year: The Deep Space Climate Observatory (DSCOVR), a satellite that monitors climate and space weather; and the Orbiting Carbon Observatory 3 (OCO-3), an instrument that would study the distribution of carbon dioxide on Earth while mounted outside of the International Space Station.

With the agency's renewed focus on sending astronauts back to the moon and ultimately to Mars, the new budget request includes $10.7 billion for NASA's "exploration campaign," which includes funding for the Space Launch System megarocket, a lunar space station and technologies needed to build a human outpost on the lunar surface.