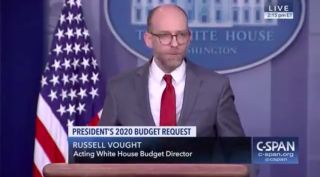 WASHINGTON — The Trump administration is proposing a $4.7 trillion federal budget for fiscal year 2020 that includes $750 billion for national defense — a $34 billion increase, or about 5 percent, over what Congress enacted for fiscal year 2019.

To fund the large increase to defense spending, the administration is proposing cuts of 5 percent to non-defense programs and is pumping up the Overseas Contingency Operations account from $69 billion in 2019 to $165 billion in 2020. Past administrations have used the OCO account to boost the military budget, as OCO is not subject to Budget Control Act spending caps. But this year's OCO boost is unusually large, especially at a time when Trump is reducing overseas military presence.

Office of Management and Budget Acting Director Russell Vought defended the OCO gambit. He told reporters at the White House on Monday that the administration sees OCO as a legitimate vehicle to fund national defense priorities. Congress in past budget deals agreed to add more money to defense only if it's matched by increases to non-defense agencies. Trump wants to "break that paradigm," Vought said. "Until that paradigm is broken we need to look for other opportunities to continue to rebuild the military."

Within the $750 billion request, the administration is seeking $576 billion in the Pentagon's baseline budget — the limit set by the Budget Control Act —  $165 billion in OCO funds and $9 billion in emergency funds for disaster relief and to partially fund the wall the president wants to build along the U.S.-Mexico border.

Trump's budget request will not be well received on Capitol Hill. With Democrats in control of the House, a budget that boosts military spending and slashes domestic programs is a political nonstarter, analysts said.

"The FY20 budget is dead on departure as Congress won't agree with a defense increase that rely on OCO to sidestep the Budget Control Act nor will it support 5 percent cuts to non-defense discretionary funding," commented defense industry analyst Byron Callan, of Capital Alpha Partners.

Congress also will challenge the idea that the 2020 budget top line is growing while the U.S. military presence in Afghanistan and Syria is shrinking, noted Travis Sharp, of the Center for Strategic and Budgetary Assessments.

Pentagon officials will argue that savings from troop withdrawals are being invested in advanced technology to compete with China and Russia. "But Congress may oppose treating defense dollars so interchangeably, particularly when doing so includes gimmicks like the administration's proposal to evade the Budget Control Act spending caps by redirecting funds into the OCO account," Sharp said.

The 2020 budget seeks funds to establish the U.S. Space Force as the sixth branch of the armed forces. Details of the Pentagon's space funding request will be released on Tuesday.

SpaceNews previously reported that the administration will request $72 million to stand up the Space Force headquarters. DoD officials on March 1 detailed a five-year plan to establish a Space Force of 15,000 members, at an annual cost of about $500 million.

In budget documents released on Monday, the White House said the Space Force will "initially realign existing space forces and materiel from the military services and will scale up responsibly and deliberately over the next several years."

The Pentagon can stand up the Space Development Agency and U.S. Space Command without new legislation but needs Congress to authorize the Space Force as a new military branch. Despite the administration's full-court press, many lawmakers remain skeptical that a new military branch is needed, noted military analyst Dan Grazier, of the Project on Government Oversight. "History shows that the creation separate military service will add bureaucratic barriers and largely serve its own ends, making it more difficult for the other branches to get the support they need to achieve their missions on Earth."