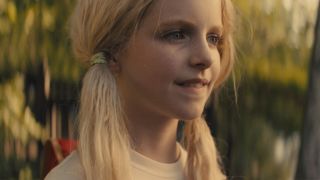 Back in 1977, NASA sent twin spacecraft into the cosmos. These craft, the Voyager 1 and Voyager 2 missions, flew past the outer planets of the solar system, reached interstellar space and are still transmitting scientific information today.

The new movie "Troop Zero" fictionalizes the cultural impact of the vessels' famous message: The Golden Record. Each of the two Voyager craft carries a copy of The Golden Record, which contains recordings (and images) of everything from popular music to whale calls to a variety of languages from Earth. You can watch "Troop Zero," which was released Jan. 17, on Amazon Prime.

"The story is about whose story gets told in history, and what stories we deem are important; those don't always look like us [women]," Lucy Alibar, the screenwriter for the film, told Space.com. "It's so much more true of women of color."

The film — which is set in 1977 — includes significant representations of women and women of color, and even hints at one character's ambiguous gender identity. It takes the audience back to the 70s to a small town in rural Alabama, where a 9-year-old girl named Christmas Flint (played by Mckenna Grace, "Designated Survivor") spends much of her spare time learning about space at the library and on television, as the adults in her life struggle to make a living.

Flint hears about a contest to put recordings of children’s messages on the Golden Record and rounds up a group of kids to create a Birdie Scouts youth group to pursue the prize. (Make sure you stick around to the end of the film to see their performance — it includes a cute space reference.)

To pull this off, Flint must also convince the adults in her life to help, including her father (a struggling lawyer) Ramsey (played by comedian Jim Gaffigan, "The Jim Gaffigan Show"), Ramsey's employee Miss Rayleen (played by Viola Davis, "How to Get Away with Murder") and Birdie Scout troop leader Miss Massey (played by Allison Janney, "The West Wing").

Alibar, who grew up in a rural area of Florida, drew upon her own childhood to write about the characters and the story. She wanted to portray all of the children as "gifted scientists," even those who were not accepted easily by adults because of their background or behavior. In the film, Flint is also reaching an age when she's learning about the bigger world beyond her small community, Alibar said. "You start realizing the rest of the world becomes more concrete, more in a way than it was before," she said.

The Golden Record committee was led by Carl Sagan, a Cornell University physics professor and famous science communicator. Sagan wrote books about space, including "Contact" (Simon and Schuster, 1985), which, 12 years later, inspired the Hollywood movie of the same name,  starring actress Jodie Foster. Alibar is careful to say that "Troop Zero" is not directly inspired by "Contact," though both films discuss two young girls who overcome difficult circumstances to grow up to become space scientists.

Rather, Alibar describes herself as influenced by many things, including Sagan's work and the work  of his widow — and also science communicator —  Ann Druyan, who co-wrote the series "Cosmos." Following Sagan's death in 1996, Druyan wrote quite a bit about her husband.

"She had so much to say about mortality and what isn't possible with science," Alibar said. "The whole idea of The Golden Record is, you can look at it as a way of allowing us to live forever, and the way she talked about her husband's death and this man she loved so much — and the real finiteness of that, and the real finality of death — was incredibly interesting … it was so moving for me to think about, and I lost so much sleep that I started writing about it."

Alibar said that she hopes "Troop Zero" can serve as a rallying call to women and young girls who are going into science, technology, education and math (STEM) careers. "I think it's really important to support girls and women that want to read and tell stories about space and science," she said. "If you've always wanted to write about it, and you're worried you don't know enough science to do this, just do it … the beautiful thing about science is, it's a way of quoting this incredible miracle of life, and its incredible mystery."