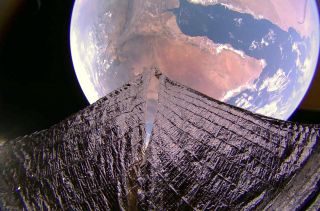 LightSail 2 has been orbiting Earth for eight months now, and it has captured some stunning shots of our home planet during that time.

The Planetary Society built the spacecraft, which launched in June 2019 on a SpaceX Falcon Heavy rocket, to prove the potential of solar sailing. Rather than relying on conventional fuel, LightSail 2 uses a massive sail to catch photons (light particles) from the sun to power the spacecraft's orbit. The goal is for LightSail 2 to remain in orbit for about a year.

Spacecraft personnel have been evaluating LightSail 2's success throughout the mission and recently summarized what they've learned from the flight and how they've handled the anomalies that have occurred.

Related: A solar sail in space: See the awesome views from LightSail 2

Based on the flight to date, those personnel have recommended that future solar sails feature solar panels on both sides of the sail, rather than on only one side. That's becauseLightSail 2 uses the one-sided design, and it's caused a few power-production problems for the spacecraft, according to the new report from the team.

The LightSail 2 mission team also recounted the spacecraft's difficulty in navigating Earth's cushy atmosphere, even at altitudes of 450 miles (720 kilometers). Those struggles suggest that solar sail missions will be most successful when targeting even higher altitudes around Earth or venturing into deep space.

But these missions might not be able to take quite as nice photos of Earth.

An image of the northeast coast of South America taken by LightSail 2 on Jan. 11, 2020.