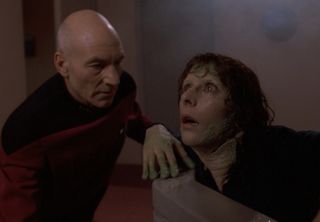 As the world grapples with the spread of the new coronavirus, which has grown into a worldwide pandemic, we turn to examples in "Star Trek: The Next Generation," to remember how Captain Jean-Luc Picard and the crew of the Enterprise dealt with the issue of outbreak.

So, how does the great Picard and his valiant crew handle the spread (or the perceived spread) of disease? Let's take a look.

In "Genesis" (S07ep19), Lt. Barclay goes to see Dr. Beverly Crusher, thinking that he's dying of some mysterious illness. Dr. Crusher assesses him, determines that he's just come down with the Urodelan flu, and sends them off with a fairly simple treatment.

But, as time passes on the Enterprise, crewmembers start acting strange. While Worf gets more and more irritable (and hungry) and starts to act in what appears to be a more "primal" fashion, Counselor Troi starts to feel too dry and cold, Barclay starts acting strangely upbeat and energetic and Riker starts having trouble with his memory. These symptoms worsen and, as Troi and Worf make it to sickbay, Dr. Crusher makes a striking observation.

More: The 10 best 'Star Trek' episodes of all time!

She spots venom sacs under Worf's jaw — and he then sprays venom at Dr. Crusher and flees. After Dr. Crusher gets medical help, Barclay notes that the venom she was sprayed with has been found in other parts of the ship.

As this has been going on, Picard and Data have relocated the ship after leaving to disarm a threatening torpedo. But, in coming back to the ship, they find that the ship seems to be overrun with strange creatures. But it's not a bunch of strange creatures — it's the crew of the Enterprise. Troi is in her bathtub and appears to be almost amphibian, and many of the other presumed infected crew members are in a similar state. Riker has seemingly devolved, similar to Worf.

After Troi and Riker are taken to sickbay, Data finds that a synthetic T-cell has infiltrated Riker's genes. Through further analysis, he finds that a contagious virus spread through the venom is affecting the crewmembers' genetic makeup and altering it with genetic information from other species, even those that are extinct. So, while Troi is going amphibian, other crewmembers are changing into other species and even seeming to devolve. This presents an extra fear to Picard that predator/prey relationships might

As Picard, who has already started exhibiting symptoms and, according to Data's findings with the tricorder becoming a pygmy marmoset, and Data work quickly to find a cure for this rapidly spreading and dangerous virus, Data finds that the fetus of Ogawa isn't infected. So, by using unaffected amniotic fluid from this fetus, he tries to create a retrovirus that could cure the affected crewmembers. While fighting off an aggressive Worf, Picard greenlights Data to send the completed retrovirus throughout the ship as a gas. Thankfully, the retrovirus works and slowly and strangely, things go back to "normal" aboard the Enterprise.

Updates: A guide to what 'Star Trek' to watch before 'Star Trek: Picard'

In "Symbiosis" (S01ep21), Picard has the crew beam over the crew of the ship known as the Sanction to save them from incineration as they veer too close to the dangerous atmosphere of an exoplanet. Only four of the six crewmembers of the Sanction are able to be beamed over in time, as they had their cargo beamed aboard first, to the confusion of the Enterprise crew.

Quickly, a fight over the mysterious cargo breaks out and, after this tense confrontation, the four are taken to the observation lounge where it's revealed that the cargo is medicine that was destined for their planet to combat a plague. Two of those beamed over are Ornarans, and the other two are Brekkians. The Ornarans reveal they're infected with the plague and Picard immediately puts the entire ship on med alert, which essentially quarantines those suspected to be sick to prevent the further spread of this illness. But over in sickbay, Dr. Crusher can't seem to find a cause of the sickness.

The two Brekkians are refusing to allow Dr. Crusher to use any of the medicine in their cargo for the Ornarans, as they haven't been paid for it (though the payment was destroyed with their ship). Finally, after Picard speaks with them, the Brekkians agree to give two doses of medicine to the Ornarans.

But, as Dr. Crusher observes them taking the medicine, it becomes apparent that the "plague" is really just a widespread addiction: the Ornaran people are dependent on an addictive narcotic from the Brekkians and were only experiencing withdrawals.

Dr. Crusher is extremely concerned and even suggests trying to create a non-addictive version of the "medicine," but Picard insists that they cannot interfere because of the prime directive.

T'Jon, one of the Ornarans, insists that they get the rest of the drug to their planet, even taking Riker hostage to try and force the Captain's hand. But Picard refuses, and Riker is released.

In an effort to uphold the prime directive, Picard ultimately decides to let them leave with the drugs, but refuses to repair their ships because, without their ships, they cannot get more of the drug and will eventually have to withdraw from their addiction.

In "Thine Own Self" (s07ep16), Data is out on an away mission to a planet where a probe with radioactive material crashed. He's there to collect radioactive fragments, but, when Data is shown visibly shaken in torn clothes, it's clear something went wrong. Data has no idea who he is and why he's there. He's holding a box, but he's not sure what's in it. All Data says is the word "radioactive" as if it's his name.

A Barkonian named Garvin, who Data runs into on the planet and has this interaction with, opens the box and picks up pieces of metal. Garvin and his daughter take care of Data who, despite his shaken appearance and confusion, isn't ill, according to a doctor who comes to see him. But soon Garvin starts to feel ill, and the people of the town quickly turn on Data, insisting that he's brought some sort of disease to the town and is infecting others.

Garvin's daughter Gia starts feeling ill as Data works quickly to try and find a cause for the sickness. Eventually, he's able to trace the illness to the presence of the radioactive metal from the box, which has been by this point partially sold to the town blacksmith and made into jewelry for Gia.

Data, after being exposed for being an android (and he's still confused about that, due to a mysterious amnesia), finds a cure for the radiation-linked illness. But, despite coming up with a cure, the townspeople are still convinced he was responsible for bringing a "plague" to the town. Data pours the cure into the town's water supply so that it can get to everyone, but they stab him nonetheless.

Riker and Dr. Crusher, concerned for Data, beam down and try to find him while in disguise to blend in with the Barkonians. Gia shows them a tombstone and says that Data (who she calls by a different name) is dead. Riker has Data's body and the fragments of the radioactive metal he was found with beamed up to the Enterprise.

There, Data is repaired and shares with Picard that the probe he went to investigate shocked him and messed with his memory.