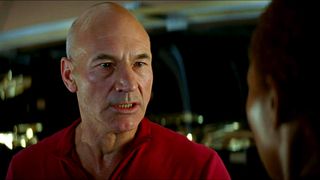 Sir Patrick Stewart's Jean-Luc Picard is one of the greatest Trek captains of all time.
(Image: © Paramount)

With the new series "Star Trek: Picard," a fan-favorite character is back. For many, Capt. Jean-Luc Picard (played by Patrick Stewart), who led us through triumph and turmoil in "Star Trek: The Next Generation" (TNG), has been the embodiment of standing by your principles and acting on your values in the Trek universe. And though his circumstances may have changed drastically in the new show, the man remains the same — committed to doing what he believes is right.

That's a defining trait for Capt. Picard, and the theme appears throughout TNG. That's why we've compiled this list of Picard's 10 greatest moments over the course of TNG. While some of his most popular moments are on this list, you will also find some quieter, more thoughtful examples from the show that reveal the many facets of this great and complicated man.

One of Capt. Picard's most notable and respected traits is that he implicitly trusts the judgment of his crew, which is very much on display in this episode. In it, the Enterprise-C travels back in time and changes history for the worse; the Federation is in a war with the Klingons, and it is losing badly. Though Picard has no knowledge of the alterations to the timeline, he listens to both Guinan and Tasha Yar, who advise him to send the Enterprise-C back through time again, even though it will mean Yar's destruction. It's an incredibly risky move, but it pays off and eventually restores the timeline and the original order.

One of the most devastating moments from TNG came when the Borg assimilated Capt. Picard and used his knowledge to decimate a Federation war fleet at Wolf 359. It's heartbreaking, to say the least, and it might be one of Picard's lowest moments on the show.

But it leads to one of his greatest moments — when he finally breaks through the Borg implants and collective consciousness of the aliens to tell Data how to shut down the Borg cube. It shows incredible resolve and strength of character that Picard can push through and help his crew to defeat the terrible threat.

"There are four lights!"

Many claim that TNG never went into dark territory, but that's not the case at all. Some of the show's most notable moments explored darker themes, which is clear in "Chain of Command," a two-part episode that's difficult to watch but incredible nonetheless. When Picard is kidnapped by Cardassians and tortured, they try to break him by insisting that there are five lights in front of him when there are, in fact, four. It's a brutal process that really shows the viewer the degradation and mental stress of torture, at least in Trek form. In the end, Picard doesn't break, though he later admits he was very close to doing so under the strain.

Episode: "The Measure of a Man"

"Starfleet was founded to seek out new life. Well, there it sits!"

One of the most thoughtful and poignant episodes of TNG comes when Data is put on trial to determine whether he's the property of Starfleet or a form of intelligent life allowed to make his own decisions.

In the episode, the outcome of the trial will determine the fundamental nature of what Data is and what rights he has, and Picard takes his duty to defend Data and his rights incredibly seriously. This is one of those episodes that shows the series at its absolute best, and Picard's impassioned speech in defense of Data is surely one for the books.

"With the first link, the chain is forged. The first speech censored. The first thought forbidden. The first freedom denied — chains us all irrevocably."

When Starfleet Adm. Norah Satie arrives aboard the Enterprise in hunt of a spy who's been leaking information to the Romulans, it seems like a necessary endeavor.

Except, even after the saboteur is caught, Satie continues her investigation aboard the Enterprise, certain that the conspiracy is wider-ranging than it appears. She goes after Simon Tarses, a young officer, before turning her eyes on Picard himself. The captain becomes convinced that Satie's investigation has become a xenophobic witch hunt that completely disregards the truth.

"I wasn't strong enough! I wasn't good enough! I should have been able to stop them!"

Taken hand in hand with "Best of Both Worlds," "Family" is the oft-missed conclusion of a three-episode arc in which Picard returns home to France and grapples with the implications of what happened to him at the hands of the Borg.

Too often, in episodic television of TNG"s era, traumatic things happened and characters would be "fine" the next week because of show creators' resistance to serialized storytelling. This episode, however, allowed Picard to process his trauma and grief, and it's one of his best moments, not in spite of his naked vulnerability, but because of it.

"I would rather die as the man I was than live the life I just saw."

In this memorable episode, Q, an omnipotent being, offers Picard the chance to live a different life. After the captain dies on the operating table following a heart attack, Q allows the man to go back in time and choose not to provoke the Nausicaans who stabbed him through the heart as a young Starfleet officer, which is what led to this moment. However, it turns out that incident was a defining moment in Picard's life, and in the end, he chooses to return to his old life. He realizes he'd rather risk death than live a safe, boring life.

"If we're going to be damned, let's be damned for what we really are."

TNG's pilot episode isn't exactly considered the best of the series. In fact, as far as first episodes across the franchise go, it isn't exactly beloved. But in this episode, Stewart establishes the character of Picard and viewers get to see what the man is made of. Not to mention, the pilot introduces Q to the "Star Trek" universe.

Q was a gift, especially in his interactions with the honorable captain; from the powerful being's pettiness to his ability to needle Picard in the best way, he's a vital part of the "Star Trek" universe.

"The line must be drawn here. This far and no further!"

This might be cheating a little bit, because "First Contact" is a movie and not a TNG episode. But it's hard to argue that this impassioned speech isn't one of Picard's most memorable. The greatest moment of the film, however, isn't the speech itself; it's what comes after. Picard accepts that his vendetta against the Borg is, in fact, personal, and acknowledges that he needs to move beyond that fixation to save his crew. It's never easy to accept when we're wrong, and it's all the more moving to see such an icon admit that he's been shortsighted.

"The first duty of every Starfleet officer is to the truth, whether it's scientific truth or historical truth or personal truth! It is the guiding principle on which Starfleet is based, and if you can't find it within yourself to stand up and tell the truth about what happened, you don't deserve to wear that uniform."

One of Stewart's most amazing talents is his ability to moralize and deliver lessons about values without sounding preachy or off-putting. That's one of the reasons why Picard has endured over the years, because he was a beacon of accessible hope for many viewers.

Delivered to Wesley Crusher, this speech from "The First Duty" reminds us how important our values are and that the most important thing any of us can do is adhere to the truth. Given the premise of the new show, "Star Trek: Picard," this speech is extra-fitting, because it reminds us what Starfleet has always stood for and how it may or may not be failing the galaxy decades later.