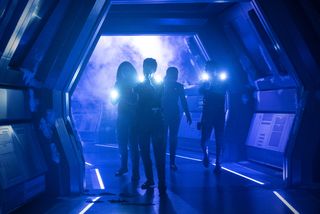 The Discovery crew has a bold plan to save Tilly (Mary Wiseman) from an unwanted trip to the spore dimension in the "Star Trek: Discovery" episode "Saints of Imperfection."
(Image: © Michael Gibson/CBS)

Every incarnation of "Star Trek" has been a little bit different; the characters and storylines reflect the pop culture and social trends of the time — both good and bad. From doe-eyed women being manhandled in the '60s to having a therapist on the bridge in the '80s to the black and female empowerment of the '90s, "Star Trek" series gave us a snapshot of television from their times, like a contemporary novel.

"Star Trek: Discovery" is also a snapshot of television from its moment in time, and so it reflects something very different from the "Star Trek" of previous eras. Television as a medium is undergoing a transformation. No longer do we have just a handful of channels to choose from; instead, we have thousands of options. We're binge-watching entire seasons, and we're watching on multiple devices. [The Evolution of 'Star Trek' (Infographic)]

That's a lot of content, which means a lot of competition. There simply isn't enough time to watch everything, and it's easy to miss an entire series or three. And as supply increases exponentially, "Star Trek: Discovery" is scrambling to maintain a minimum visual spectacle and falling victim to style over substance.

It's always a gamble to be bold with story and characters. "Game of Thrones" and "Breaking Bad" did this successfully, but it doesn't always work. It can make a TV show stand head and shoulders above the rest, or it can plunge a show into the depths of obscurity.

HBO's "Westworld" promised great things, but it was basically just a story about really wealthy people and how they got their rocks off. It started bad and somehow got even worse in Season 2. It tried, but failed to create a show with characters that anyone gave two hoots about.

And if we're wrong about the benefits of bold story and substantial characters, how come Lucasfilm has just hired "Game of Thrones" showrunners David Benioff and D.B. Weiss to develop a new "Star Wars" trilogy?

Sadly, "Star Trek: Discovery" doesn't seem to be taking any risks, and the latest episode is a case in point. While it's tragic to have a wonderful character like Dr. Culber (Wilson Cruz) killed off, a decision was made, so for the love of Kahless, keep it that way. Take some responsibility and don't go down revive road and bring him back. Or if you do, at least add some Mary Shelley to it.

Obviously, Spock was bought back in "Star Trek III: The Search for Spock," but that was in 1984, and times have changed — the revival of major characters has become something of a cliche.

So, if you haven't seen this most recent episode of "Star Trek: Discovery" — but are braving these spoilers anyway — you may be able to hazard a guess about what happens in at least part of it.

Entitled "Saints of Imperfection," it begins right after the events of last week's episode, with Burnham (Sonequa Martin-Green) sprinting down the corridor to engineering to find out what the blazes happened to Tilly (Mary Wiseman), who last episode was abruptly cocooned by the spore-dimension entity pestering her.

At the same time, the USS Discovery has finally caught up with Spock's shuttle craft and attempts to hail it. Having no luck, Discovery Capt. Pike orders a photon torpedo be launched and detonated 100 meters (330 feet) from the shuttle craft to disable it. For the first time in "Star Trek" cinematic history, we see a POV shot from a photon torpedo, which is as cool as it sounds.

The shuttle is brought on board, and who steps out? Not Spock — it's Emperor Georgiou, aka, mirror universe Philippa Georgiou, aka, her most imperial majesty, mother of the fatherland, overlord of Vulcan, dominus of Qo'noS, Regina Andor, Augustus Iaponius Centarius, if you prefer. Anyway, it's Michelle Yeoh.

This marks the first time that anyone on the Discovery learns that Georgiou has been recruited into Section 31, the clandestine division of Starfleet. Georgieu reveals that Section 31 is also tracking Spock, since he's accused of multiple murders, but she is being difficult about communicating with the Discovery crew.

Pike's (Anson Mount) banter with Georgiou is entertaining, displaying why he's up there with Saru as one of the two best characters on Discovery. Perhaps Pike should have his own spinoff series. Yes, we know what his future ultimately holds — see his time on "Star Trek: The Original Series." But the same sort of spinoff with a show's minor character has been done very successfully with "Better Call Saul," which spun off a "Breaking Bad" character. So, why not Pike? In fact, "Breaking Bad" and "Better Call Saul" creator Vince Gilligan should write a Capt. Pike spinoff series. … Alternatively, just let Gilligan write all of Season 3 of "Star Trek: Discovery." [Colliding Galaxy Clusters Look Like Starship Enterprise (Photo)]

Turns out Pike and Agent Leland (Alan van Sprang) go way back, and again, the banter between the two is nice. Burnham discovers what has happened to Tilly, and the crew concludes that they have to take the Discovery into the mycelial subspace domain to attempt a rescue. Meanwhile, Tilly wakes up in said spore dimension after being transported there inside that weird cocoon thingy.

May Ahern (Bahia Watson) — the spore-dimension entity herself — explains that there's a "monster" destroying the fragile mycelial ecosystem, and Tilly and May agree that if Tilly can stop it, then she can return home.

The Discovery, meanwhile, attempts a "half-jump" into the subspace spore domain, so Stamets (Anthony Rapp) and Burnham can travel between normal space and the mycelial environment. To do so, they'll use the spore chamber onboard the Discovery as an airlock of sorts.

And if that sounds absurd, then strap yourselves in, 'cause this ludicrous technobabble juggernaut is about to dial the warp drive up to 11.

The clock is ticking. The mycelial spores are rapidly degrading the integrity of the Discovery's tritanium hull, so Stamets and Burnham have only about an hour to find and rescue Tilly.

Leland has left a (permanent?) Section 31 liaison behind on the Discovery, and the assignment has been given to Ash Tyler (Shazad Latif), who we saw being recruited in the episode "Point of Light" (S01, E03). As the Discovery lurches left and right, with sparks flying in every direction, Tyler makes a distress call to the Section 31 ship by tapping a "Next Generation"-style combadge on his uniform — a nice, but risky nod to the fact that they must have developed that tech some 100 years before we saw Jean Luc Picard using it. Pike even hangs a lantern on the reference by exclaiming above the noise, "What [the] hell kind of communicator is that?!"

The Section 31 ship arrives — not quite clear how — and de-camouflages, locking tractor beams onto the Discovery. Meanwhile, Stamets and Burnham have located Tilly, who's with May, and they have also found the "monster" that's causing the damage … and it's their former crew mate, Culber. He's gone full "Cast Away," having been trapped in the mycelial network for goodness knows how long.

Through the power of touch and maybe even a tear or two, Stamets has unknowingly re-created Culber's DNA in the network right after his death. Culber's return is an emotional scene as everyone is overwhelmed to see Culber again, the audience included, but sadly, the sheer ridiculousness of the occurrence drives a wedge between the viewer and the story.

Apparently, it's all down to thermodynamics: "Matter cannot be destroyed; it only changes state." So, with the Discovery only seconds away from disintegrating, the crew attempts to bring the good doctor back to normal space. Initially, though, this doesn't work, and he can't "re-materialize" properly. Even though nothing whatsoever will matter in a few moments, as they'll all die horribly very soon, Tilly, Stamets, the Doc, Burnham and May all act remarkably calm.

They deduce that the reason Culber can't cross over is that he's entirely reconstructed from mycelial network material. But fortunately, the leftover cocoon that transported Tilly on the Discovery is composed of matter from normal space and so can contain human DNA — therefore, it can complete his transfer and transformation.

Cut to engineering: The chrysalis of Culber hatches, and the good doctor is returned to us, safe and sound (complete with a crisp new haircut). The Discovery performs another "half-jump" and returns to normal space

Finally, Leland gets his knuckles rapped by Adm. Cornwell (Jayne Brook) for not playing nice with the other Starfleet children. This jars somewhat, since we've been given the impression that Section 31 operates above the law and is therefore untouchable by the likes of Cornwell. Apparently not, and he's ordered to exchange information about the "red angel" signals with Pike.

If you're really hungry, any crumb seems like a gourmet meal … and "Star Trek" fans are starving. We have been since the vastly underrated "Star Trek: Enterprise" was untimely canceled in May 2005. And that's a long time to go hungry. Occasionally, "Discovery" gives us an episode to get us excited again, like "New Eden" (S02, E02), but then — like with an odd-numbered "Trek" movie — we get let down again with the very next installment.

Storytelling on television has evolved. "Star Trek: Discovery" can retain what makes it "Star Trek," but its storytelling lags behind the best TV on offer today. And that's a shame, especially when each episode reportedly costs upward of $8.5 million.

The second season of Star Trek: Discovery consists of 14 episodes with no midseason break. It airs on Thursdays on CBS All Access in the U.S. and on the Space TV channel in Canada; the rest of the world can see it on Netflix on Fridays.