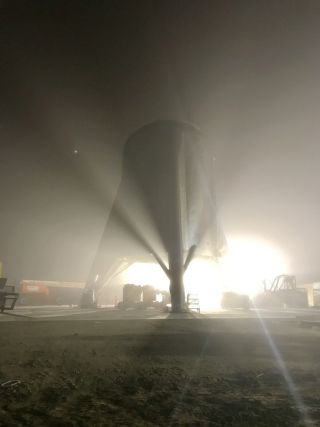 SpaceX's Starhopper prototype is seen during testing operations at the company's launch site in Boca Chica, Texas near Brownsville, Texas in this photo released by CEO Elon Musk on April 7, 2019.
(Image: © Elon Musk/SpaceX via Twitter)

SpaceX's Mars-colonizing tech will take a big leap soon, if all goes according to plan.

Starhopper has made two brief test flights to date, both of them while tethered to the ground for safety's sake. Those flights occurred in April at SpaceX's Boca Chica facility, near Brownsville, Texas. The upcoming, untethered flight will also occur at Boca Chica.

This first version of Starhopper features one of SpaceX's advanced, next-generation Raptor engines. SpaceX has been testing the engine that will soon fly extensively over the past few weeks, and it is apparently now ready to go, as Musk said.

A Tuesday test is apparently not in the cards, however. Starhopper fans in South Texas noted that SpaceX has not yet static-fired the Raptor — a standard engine test SpaceX performs before launches and flight tests.

Future, higher-flying iterations of Starhopper will sport three Raptors. The fully operational, 100-passenger Starship will have six of the engines. Starship will launch atop a huge rocket called Super Heavy, which will be powered by 31 Raptors. Both Starship and Super Heavy will be reusable.

Indeed, SpaceX is counting on both vehicles to fly frequently and repeatedly, bringing the cost of launch down enough to make it economically feasible to tackle Mars settlement and other ambitious exploration feats.

SpaceX is building Starship prototypes at Boca Chica and on Florida's Space Coast, reasoning that some competition will improve the vehicle's design.

The Starship-Super Heavy duo has one confirmed mission on its docket: a round-the-moon trip booked by Japanese billionaire Yusaku Maezawa, who plans to take a group of artists with him. That flight is targeted for 2023. But SpaceX is looking to launch an uncrewed commercial satellite mission sooner — perhaps as early as 2021.

Editor's Note: This story was updated on July 16 to state that SpaceX has not yet performed a static-fire test, according to Starhopper watchers.