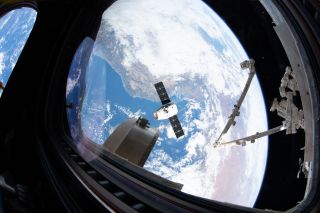 A SpaceX Dragon cargo resupply spacecraft will undock from the International Space Station Tuesday (Jan. 7) to begin a 5-hour journey back to Earth, and you can watch its departure live online.

The unpiloted Dragon capsule, flying on a mission called CRS-19, is scheduled to leave the orbiting laboratory at 5:03 a.m. EST (1003 GMT), when mission controllers in Houston will command the station's Canadarm2 robot arm to release it into space. You can watch a live webcast of the Dragon's departure live here on Space.com, courtesy of NASA TV, beginning at 4:45 a.m. EST (0945 GMT).

After firing its thrusters to maneuver away from the station, the Dragon will execute a deorbit burn that will send it plummeting into Earth's atmosphere, where it will conduct a parachute-assisted splashdown around 10:47 a.m. EST (1547 GMT), in the Pacific Ocean southwest of Long Beach, California. NASA and SpaceX will not provide live coverage of the splashdown.

The used CRS-19 vessel launched to the space station for the third time on Dec. 5; it previously flew on SpaceX's CRS-4 mission in 2014, followed by the CRS-11 mission in 2017, when it became the first Dragon capsule to complete a second cargo run.

Dragon will return to Earth with 3,600 lbs. (1,633 kg) of experiments, including a so-called "mighty mice" for studying muscle and bone loss, a radiation resistance experiment involving "tiny aquatic animals called rotifers, as well as a series of crystal growth demonstrations.