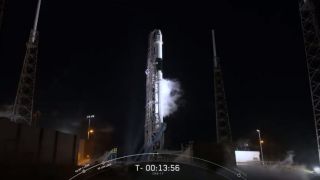 CAPE CANAVERAL, Fla. — SpaceX’s next cargo mission to the International Space Station has been delayed by at least 24 hours due to technical issues.

However, as fueling procedures were underway and with less than 15 minutes left in the countdown, the launch managers called a hold. They cited a helium leak on the quick disconnect on the rocket’s second stage, as well as an electrical issue with the drone ship "Of Course I Still Love You," which will serve as a landing platform for the booster's reusable first stage when it returns to Earth.

Due to the instantaneous launch window, crews had to stand down from today’s attempt to try and work through the issues.

Standing down today due to an electrical issue on the Of Course I Still Love You droneship. Teams will also address the ground side helium leak before tomorrow's backup launch opportunity at 2:48 a.m. EDT, 6:48 UTC.May 3, 2019

Today's delay is the latest in a series of slips that saw the launch move from April 26 to (now) May 4.

If the Falcon 9 cannot get off the ground on Saturday, the next attempt will come no earlier than May 12 or May 13. That's because of a previously planned weeklong stand-down of the Eastern Range, which supports launches from Cape Canaveral and nearby Kennedy Space Center, NASA officials have said.

When it does launch, the Dragon will carry more than 5,500 lbs. (2,495 kilograms) of cargo, crew supplies, and research experiments for the space station. One of the payloads is an experiment called the Photobioreactor, which will test the cultivation of microalgae to someday serve as both food and a source of oxygen on the space station.

Also on board are a series of investigations involving tissue chips. Tucked inside the Dragon cargo hold are four different varieties: a lung and bone marrow chip, a cartilage and bone chip, a chip that simulates the blood-brain barrier, and one that cultivates kidney cells. Researchers say that the chips will help astronauts monitor simulated organs' reactions in space.

Another exciting tool is nestled inside the Dragon’s trunk. Once unpacked, the Orbiting Carbon Observatory-3 instrument will be attached to the space station’s exterior via a robotic arm, where it will measure atmospheric carbon dioxide and map sources and sinks of the gas.