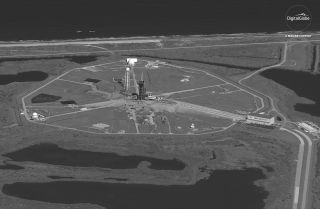 A satellite spotted the SpaceX Falcon 9 rocket carrying the first test flight of the Crew Dragon horizontal at the launch pad on Feb. 28, 2019.
(Image: © Satellite image ©2019 DigitalGlobe, a Maxar company)

In just a few hours, SpaceX will send its first Crew Dragon capsule — the spacecraft designed to ferry astronauts to the International Space Station — on an uncrewed test mission to the orbiting laboratory, and space fans are watching closely for lift-off.

Satellites are watching too, as these incredible images from DigitalGlobe's WorldView-1 satellite show. Taken yesterday (Feb. 28), the images show the rocket at historic launch pad 39A at NASA's Kennedy Space Center in Cape Canaveral, Florida. The images were taken during roll-out, when the rocket was at the launch pad but before it was raised to vertical in preparation for tomorrow morning's launch.

Lift-off is scheduled for 2:49 a.m. EST (0749 GMT), with the weather forecast predicting an 80 percent chance of favorable weather.  You can watch launch coverage on Space.com, courtesy of NASA TV and SpaceX, beginning at 2 a.m. EST (0700 GMT).

If all goes well, the capsule will arrive at the space station early on March 3 and return to Earth on March 8.

The satellite images are a type of picture known as high off-nadir imaging, which means that they were taken from relatively far away with a gentler angle on the target, rather than a straight bird's-eye approach.

As these images show, the Falcon 9 will be blasting off from amid the wetlands that line eastern Florida. Of course, the beautiful scenery itself will be difficult to spot during the early morning lift-off, which is carefully scheduled to ensure the capsule correctly meets up with the International Space Station. Barring a scrub, however, there will still be something worth seeing.