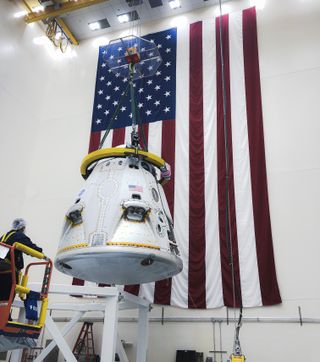 SpaceX's Crew Dragon astronaut taxi will have to wait at least another week to show its emergency-escape skills in flight.

During the uncrewed IFA, Crew Dragon will launch atop a SpaceX Falcon 9 rocket from NASA's Kennedy Space Center in Florida. Shortly after liftoff, the capsule will separate from the booster and use its SuperDraco escape thrusters to blast itself clear of its rocket ride, demonstrating the ability to keep astronauts safe in the event of a launch emergency.

The IFA is the last big milestone SpaceX needs to achieve before Crew Dragon can fly astronauts, which it will do under a contract with NASA's Commercial Crew Program. If all goes well with the abort test, the California-based company can start prepping in earnest for the Demo-2 mission, which will carry NASA's Bob Behnken and Doug Hurley to and from the International Space Station (ISS).

Aerospace giant Boeing is also developing a crew capsule, called the CST-100 Starliner, under a NASA Commercial Crew deal of its own.

Starliner flew its version of Demo-1, called the Orbital Flight Test (OFT), last month. Things didn't go according to plan, however; Starliner suffered a problem with its onboard timing system and got stranded in an orbit too low to allow rendezvous and docking with the ISS. The capsule circled Earth by itself for two days, coming down for a successful touchdown on Dec. 22.

NASA has been funding the development of Crew Dragon and Starliner to return an orbital human spaceflight capability to American soil. Since the space shuttle fleet retired in July 2011, NASA astronauts have been dependent on Russian Soyuz spacecraft to get to and from the ISS.