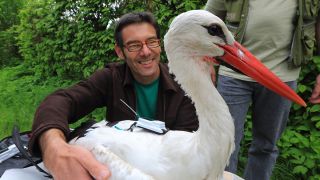 On board the International Space Station, a new antenna has switched on and is gathering data from tiny tags attached to a very different type of flier.

The antenna is part of a joint German-Russian project called the International Cooperation for Animal Research Using Space, nicknamed ICARUS, which scientists will be able to use to track wildlife, including birds. Two Russian cosmonauts, Oleg Artemyev and Sergey Prokopyev, installed the equipment during a spacewalk they conducted in August 2018.

The antenna was due to turn on July 10, beginning a period of tests to make sure the space- and ground-based pieces of the system are working properly. Mission engineers expect those tests to wrap up later this year, at which point scientists will be able to use the ICARUS system to track animals of a broad range of species as they move around Earth.

Related: These Amazing NASA Images Show Earth from Above

During the testing process, which the team behind ICARUS expects will last three or four months according to a statement from the German space agency, engineers will be looking at background noise in the range that ICARUS uses to communicate and strength of the signals themselves to understand where on Earth the system will be most effective.

The ICARUS antenna picks up signals from transmitter tags that scientists attach to the animals they want to study. Those tags can be particularly lightweight — just 0.2 ounces (5 grams) because the space station orbits much closer to Earth than most satellites that would otherwise be used to track signals, like GPS satellites. Wildlife scientists want the smallest tags possible in order to track smaller species and interfere less with an animal's life.

The ICARUS team has also produced an animal tracking app for the public that will display the locations of individual tagged animals in the hopes that people will input observations that can augment the location data with behavioral notes.