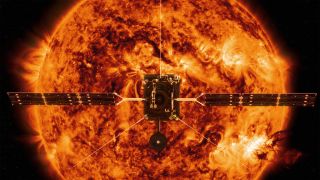 After a decade of development — and many more years of planning before that — the ambitious Solar Orbiter mission is ready to launch and take the first close look at the poles of the sun.

The spacecraft, which is a joint venture between NASA and the European Space Agency (ESA), is scheduled to lift off Sunday (Feb. 9) during  a two-hour window starting at 11:03 p.m. EST (0403 GMT on Feb. 10)  from Cape Canaveral Air Force Station in Florida. There is an 80 percent chance of good launch weather, according to the United launch Alliance, which is providing the Atlas V rocket for them mission.

After deploying antennas, solar panels and a boom a few hours after launch, Solar Orbiter will depart Earth for an approximately 10-year mission that will mostly see it slingshot back and forth between the sun and Venus. Its overall goal is to learn about the heliosphere, or the bubble of the sun's particles that extends throughout the solar system.

Related: The Solar Orbiter up close: Inside the clean room (photos)
More: The greatest missions to the sun

Officials expressed excitement about the launch and added that the last few steps before spaceflight are notable milestones.

"I'm pretty sure I'm going to feel amazing," Ian Walters, the project manager for Solar Orbiter at Airbus Defence and Space, said during  a NASA press conference on Friday (Feb. 7). "I already feel amazing now. To see the spacecraft on top of the rocket this morning ... is just a fabulous sight."

The ambitious goal to image and gather data from the sun's poles requires a spacecraft not only equipped with the right instruments, but also an advanced heat shield to protect is from the searing heat of our star as it periodically moves inside Mercury's orbit.This heatshield includes a combination of foil to reflect the heat, aluminum to protect the spacecraft and a 10-inch (25-centimeter) gap between these main layers to bleed off excess heat into space. Additionally, to keep cool, Solar Orbiter will perpetually keep its heat shield pointed to the sun so that the spacecraft can operate in shadow.

Underneath this protective shroud, Solar Orbiter's 10 instruments will gather information about the stream of charged particles emanating from the sun (also known as the solar wind), the magnetic environment of the sun and properties such as radiation. These instruments can also coordinate automatically if something interesting pops up.

"They are able to talk to each other," Garcia explained. "When one of the instruments detects an interesting feature, it can send a trigger to the other instruments to observe that same feature."

Related: Solar quiz: How well do you know our sun?

Within the next few years, Solar Orbiter is expected to reach a slew of milestones as it gets ready for its closeup of the sun. Within these milestones will be its first perihelion (close approach). t will reach its first perihelion to the sun in June of this year, approaching the sun at a distance of about half an astronomical unit. (One AU is the distance between the Earth and the sun, roughly 93 million miles or 150 million kilometers).

An even closer approach at 0.3 AU is expected in October 2022, and the first polar pass will happen in March 2025.