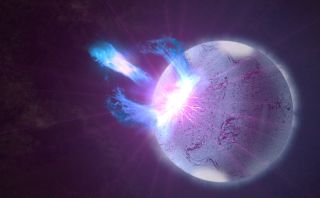 A particularly odd, spinning star has woken up, and it's spitting bright flashes of radio waves at us again.

The stellar spinner is a magnetar, which is a type of neutron star — a Manhattan-size remnant of a larger star, and the densest type of object besides black holes that we've detected anywhere in the universe.

This particular magnetar is called XTE J1810–197. It's one of only 23 magnetars and one of just four radio magnetars ever discovered, and it first turned up in 2004. Then, in late 2008, it went dormant and no longer emitted radio waves. On Dec. 8, 2018, it woke up again, and it's a bit changed. The researchers who spotted its awakening reported their finding in a paper uploaded March 6 to the preprint server arXiv.

Astronomers have long believed such magnetars carry magnetic fields more than a million times more intense than typical neutron stars and more than a quadrillion times more powerful than Earth's own. Those magnetic fields seem to be the source of intense flashes of electromagnetic energy we can detect from Earth as the magnetar spins. [7 Surprising Things About the Universe]

(Other neutron stars also emit regular flashes of energy, which gives them their second name, pulsars.)

Even so, scientists don't know why XTE J1810–197's radio emissions went to sleep or why they woke up; magnetars are among the rarest and least-well-understood objects in humanity's stellar catalog. But in the two months since its reappearance, it's behaved significantly differently than it did between 2004 and 2008.

When XTE J1810–197 last flashed across human telescopes, it acted erratically, wildly shifting its pulse profile over relatively short time periods. Now, its behavior is more stable, the astronomers reported. At the same time, the torque spinning the star has seemed to increase significantly — a trait the researchers said is common to pulsars after their dormant periods.

One remarkable aspect of XTE J1810–197's reappearance is that astronomers might have missed it. From the perspective of Earth, the magnetar is in the same part of the sky as the sun is right now. So the soft pulses announcing its reawakening were too soft to trip any general-purpose detectors watching the sky at that time. Against the sun's bright electromagnetic blast, XTE J1810–197 was barely a blip.

But a team of astronomers led by Lina Levin of the University of Manchester in the U.K. had tasked a radio telescope with periodically observing the pulsar ever since it went silent. And, more than a decade later, that close scrutiny has paid off. Levin and her team noticed what others had missed.

The researchers also reported oscillations in the radio signal that might be the result of waves rushing across the surface of the distant magnetar.