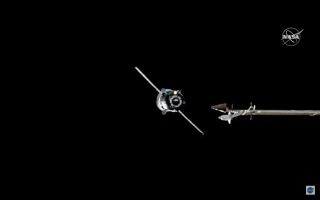 A Russian cargo spacecraft has arrived at the International Space Station (ISS), wrapping up a brief orbital chase.

The robotic Progress 75 vehicle docked with the orbiting lab at 1:12 a.m. EDT (0512 GMT) today (April 25), less than 3.5 hours after launching atop a Russian Soyuz rocket from Baikonur Cosmodrome in Kazakhstan.

The rendezvous occurred when both craft were flying about 260 miles (418 kilometers) over northwest China, NASA officials said.

Progress 75 is packed with nearly 3 tons (2.7 metric tons) of food, propellant and other supplies for the astronauts aboard the orbiting lab, who number just three at the moment: NASA's Chris Cassidy and cosmonauts Anatoli Ivanishin and Ivan Vagner.

But the ISS population will increase by two a month from now, if all goes according to plan. SpaceX's Crew Dragon capsule is scheduled to launch on May 27, kicking off Demo-2, a test mission that will send NASA astronauts Bob Behnken and Doug Hurley to the orbiting lab.

Demo-2 will be the first crewed orbital spaceflight to launch from the United States since NASA's space shuttle fleet retired in July 2011. If the test flight goes well, SpaceX will be cleared to start flying operational crewed missions to and from the ISS for NASA, which Elon Musk's company will do under a $2.6 billion deal signed with the space agency in 2014.

The Progress will be at the ISS for Demo-2; the Russian cargo craft won't depart the orbiting lab until December, NASA officials said. That departure will spell the end for Progress 75, which will burn up in Earth's atmosphere shortly thereafter.

Three other robotic spacecraft currently fly cargo missions to the ISS. Two of them are disposable like the Progress: Japan's H-II Transfer Vehicle and Cygnus, which is built by Virginia-based company Northrop Grumman. The lone reusable one is SpaceX's cargo Dragon, which ends its missions with parachute-assisted ocean splashdowns. (Both Northrop Grumman and SpaceX hold NASA ISS resupply contracts.)