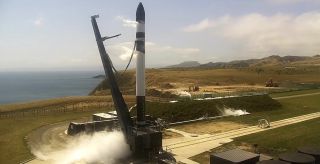 A Rocket Lab Electron booster stands on the pad after a "wet dress rehearsal" for a planned Jan. 30, 2020 launch in this photo the company posted on Twitter on Jan. 24, 2020.
(Image: © Rocket Lab via Twitter)

Private spaceflight company Rocket Lab will launch its first mission for the U.S. National Reconnaissance Office (NRO) tonight (Jan. 30), and you can watch the liftoff live.

A two-stage Electron booster is scheduled to lift off from Rocket Lab's New Zealand launch site during a 4-hour window that opens at 7 p.m. EST (0000 GMT and 1 p.m. local New Zealand time on Jan. 31). You can watch the launch live here on Space.com, courtesy of Rocket Lab, or directly via the company here.

The NRO operates the United States' fleet of spy satellites, and most details about these craft are classified. Not surprisingly, we don't know much about the payload going up tonight beyond its name, NROL-151.

Rocket Lab has launched 10 missions to date, and the California-based company has given a playful name to each one. Rocket Lab is keeping up that tradition with tonight's liftoff, which it has dubbed "Birds of a Feather."

"For more than six decades, the NRO has answered the hardest national security-related questions with bold, innovative technology, and NROL-151 stands firm in this tradition," Rocket Lab representatives wrote about the mission. "The NROL-151 mission logo is a light-hearted way to wish NROL-151 good fortune and launch on its mission."

Rocket Lab aims to greatly increase access to space with the 57-foot-tall (17 meters) Electron, which can carry about 500 lbs. (227 kilograms) to orbit on each roughly $5 million liftoff. The company's vision includes reusing Electron first stages, which Rocket Lab aims to pluck out of the sky with a helicopter as they descend postlaunch.

There will be no such dramatic aerial capture during tonight's mission. But Rocket Lab will attempt to guide the first stage back down to Earth in a controlled fashion, in preparation for that big next step. Birds of a Feather will mark the second such controlled descent for Rocket Lab; the company pulled it off on its most recent launch, which took place in December.