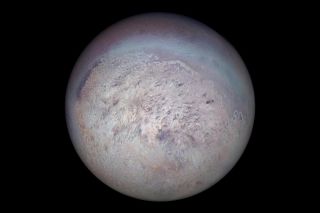 Using the Gemini Observatory in Chile and the high-resolution spectrograph called IGRINS (Immersion Grating Infrared Spectrometer), a visiting instrument for Gemini, astronomers detected a distinct infrared signature on Triton, revealing a mixture of carbon monoxide and nitrogen frozen as solid ice. This finding helps explain seasonal atmospheric changes on Triton and how material is transported across the moon's surface via geysers, according to a statement.

Prior to detecting this unique signature on Triton, researchers first identified the specific wavelength of infrared light absorbed by an ice mixture of carbon monoxide and nitrogen molecules in the lab.

"While the icy spectral fingerprint we uncovered was entirely reasonable, especially as this combination of ices can be created in the lab, pinpointing this specific wavelength of infrared light on another world is unprecedented," Stephen Tegler, lead author of the study from Northern Arizona University's Astrophysical Materials Laboratory, said in the statement.

The icy mixture detected on Triton could help explain the moon's iconic geysers, which are the dark, windblown streaks first observed by NASA's Voyager 2 spacecraft in the moon's south polar region. These distinct streaks are believed to be erupted material from an internal ocean, or an icy mixture that migrates around the surface in response to changing seasonal patterns of sunlight, according to the statement.

"Despite Triton's distance from the sun and the cold temperatures, the weak sunlight is enough to drive strong seasonal changes on Triton's surface and atmosphere," Henry Roe, deputy director of Gemini and a member of the research team, said in the statement. "This work demonstrates the power of combining laboratory studies with telescope observations to understand complex planetary processes in alien environments so different from what we encounter every day here on Earth."

In fact, NASA's New Horizons spacecraft found that carbon monoxide and nitrogen ices coexist on Pluto. However, the recent findings are the first evidence of these ices mixing, according to the statement.

Therefore, the study, which will be published in The Astronomical Journal, sheds light on the possible composition of ices and seasonal variations in the atmosphere on other distant worlds beyond Neptune.