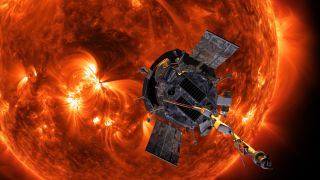 An artist's depiction of the Parker Solar Probe at work in orbit around the sun.
(Image: © Steve Gribben/NASA/Johns Hopkins APL)

The spacecraft completed its third close solar flyby on Sunday (Sept. 1), coming within 15 million miles (24 million kilometers) of our star, NASA officials said. At the moment of closest approach, or perihelion, the probe was traveling more than 213,200 mph (343,100 km/h), they added.

And the Parker Solar Probe survived its latest trial by fire in good condition.

"Mission controllers at the Johns Hopkins Applied Physics Laboratory in Laurel, Maryland, received a green 'A' beacon from the spacecraft soon after perihelion, meaning all systems were performing as designed and that the spacecraft was in good health," mission team members wrote in an update Tuesday (Sept. 3).

The $1.5 billion Parker Solar Probe launched in August 2018, on a mission to help researchers better understand how the sun ticks. If all goes according to plan, the spacecraft will make a total of two dozen close solar flybys during its seven years of operation, getting closer and closer to our star over time.

The spacecraft already holds the all-time speed and close-solar-approach records, but it will continue setting new marks through 2025. During the final few flybys, for example, the Parker Solar Probe will get within a mere 3.83 million miles (6.16 million km) of the solar surface, reaching top speeds of about 430,000 mph (690,000 km/h).

The spacecraft's various observations should help scientists solve some long-standing solar mysteries, mission team members have said. Chief among those puzzles are how the solar wind, the stream of charged particles flowing from the sun, gets accelerated to such tremendous speeds, and why the sun's outer atmosphere is so much hotter than its surface.