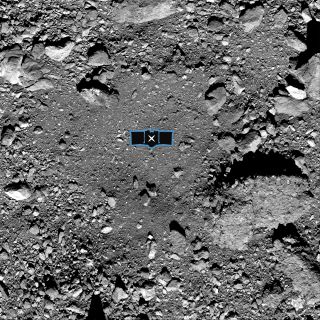 This image shows sample site Nightingale, OSIRIS-REx’s primary sample collection site on asteroid Bennu. The image is overlaid with a graphic of the OSIRIS-REx spacecraft to illustrate the scale of the site.
(Image: © NASA/Goddard/University of Arizona)

The OSIRIS-REx spacecraft will swoop down on a site called Nightingale near the north pole of the 1,650-foot-wide (500 meters) asteroid Bennu, which the probe has been orbiting since December 2018, mission team members announced here today (Dec. 12) during a news conference at the annual fall meeting of the American Geophysical Union (AGU).

"This is a day I've been dreaming of for over a decade," Dante Lauretta, OSIRIS-REx's principal investigator and a planetary scientist at the University of Arizona, told Space.com after the news conference. "And it's the culmination of the work of hundreds of people working thousands of hours, poring over the data that we've returned from the asteroid over the past year."

The $800 million OSIRIS-REx mission is investigating the solar system's early days and the role that carbon-rich asteroids such as Bennu may have played in bringing life's building blocks to Earth. Nightingale gives the team the best chance to make significant progress on those fronts, Lauretta said.

For example, the site has lots of fine-grained material that can be readily sucked up by the spacecraft's sampling mechanism. Nightingale is also close to Bennu's north pole, where temperatures have remained relatively cool over the eons. So, the dirt and rubble up there have experienced less alteration than stuff near the asteroid's equator, increasing the probability that pristine organics and hydrated minerals are there to be collected.

Indeed, Nightingale sports lots of dark material, which may well be indicative of organics, Lauretta said during the news conference. And Nightingale itself is a small impact crater that appears to be young — meaning OSIRIS-REx should be able to pick up asteroid samples that were recently unearthed (and therefore subjected to little space weathering).

However, Nightingale "does have some hazards associated with it," Lauretta said during the news conference.

For example, the crater is just 65 feet (20 meters) or so wide, making it a tight fit for OSIRIS-REx, which spans about 20 feet (6 m), including its solar panels. And the crater is ringed by some rugged rocks, including one that Lauretta has dubbed "Mt. Doom," which rises about 33 feet (10 m) above the crater floor.

OSIRIS-REx will spend the next eight months doing reconnaissance work and practicing for the sampling maneuver. Then, on Aug. 25, the probe will make its move down to Nightingale.

OSIRIS-REx's brush will Bennu will be more of a kiss than a landing. The probe will tap the asteroid with its sampling head, which will blast the space rock with nitrogen gas, stirring up lots of stuff that will get sucked up. (OSIRIS-REx can grab up to 4.4 lbs., or 2 kilograms, of stuff, but the minimum for mission success is 2.1 ounces, or 60 grams.)

These complex moves will all be performed autonomously. Real-time operation from mission control is out of the question, given Bennu's distance from Earth (and the many minutes it would take commands to bridge that gulf.)

But all is not lost if Nightingale proves to be too tough a nut for OSIRIS-REx to crack. The spacecraft will be assessing hazards all the way down, and, if it senses something going amiss, the probe can hit the brakes and head back to asteroid orbit, team members said.

If the U-turn happens close to Bennu's surface, Nightingale might be rejected as a sampling site, contaminated as it could be by the probe's thrusters. The mission team would then regroup and start planning for its designated secondary site — a spot dubbed Osprey. (Nightingale and Osprey were two of the four sampling-site finalists the OSIRIS-REx team considered. The other two also have avian names — Sandpiper and Kingfisher.)

And sampling itself isn't necessarily a one-off, make-or-break affair. OSIRIS-REx has three nitrogen bottles on board, meaning it can try three times to get the requisite 60 grams of asteroid material.

When that sample is safely onboard, the mission will move into a new phase. If all goes according to plan, OSIRIS-REx will depart Bennu in March 2021 to begin the journey back to Earth. (This is not a hard deadline, however; the window extends through that May, Lauretta said.)

That journey will take about 2.5 years. Then, in September 2023, the probe will release its special sample-containing return capsule, which will land in the Utah desert. The Bennu material will then be studied by teams of scientists in well-equipped labs around the globe for decades to come.

OSIRIS-REx isn't the only asteroid sample-return mission in operation now. Japan's Hayabusa2 spacecraft successfully snagged bits of the asteroid Ryugu, which are scheduled to come down to Earth in Australia in December 2020.

The OSIRIS-REx team is interested in a number of questions, as indicated by the mission's full name — "Origins, Spectral Interpretation, Resource Identification, Security, Regolith Explorer." For example, the mission's data could help scientists assess the resource potential of Bennu-like asteroids, team members have said.

And analyses of Bennu's motion could help researchers better predict the trajectories of potentially dangerous asteroids — a category that includes Bennu, by the way.