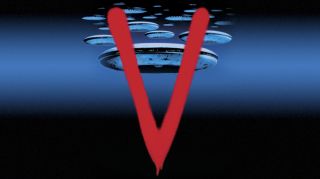 For decades, aliens have been invading Earth in science fiction literature, television and movies. Over 100 years ago, author H.G. Wells wrote about a Martian attempt to take over Earth and, since then, the idea of an alien invasion has been explored time and time again. From "War of the Worlds" to "Battle: Los Angeles," "Edge of Tomorrow" and even "Signs," the human race continues to fight beings from other worlds hellbent on conquering our planet.

There have also been a few instances of a more subtle alien takeover attempt, where the interstellar aggressors slowly infiltrated society, like in the "Invasion of the Body Snatchers" and "The Invaders," a TV show from the 1960s that has been described as ahead of its time.

"V," however, was different from all of these extraterrestrial exploits. Up until it was first aired on U.S. TV in 1983, no one had ever considered showing an alien occupation of Earth. Written and directed by Kenneth Johnson, "V" told the story of what, at first, appears to be a peaceful visitation from non-terrestrial life-forms. In the series, 50 or so giant, saucer-shaped alien motherships simultaneously descend through the Earth's atmosphere and position themselves over major cities worldwide, similar to what happened in "Independence Day" 13 years later.

Except, in this case, the visitors — who look human – proclaim that they have arrived in peace. In exchange for a reasonable amount of Earth's natural resources, they promise to share their technology, offering us the knowledge needed to construct giant spacecraft like theirs. Soon, however, a series of mysterious events make some people doubt the sincerity of these new intergalactic guests. People all over the world, including top scientists, seem to suddenly, randomly, disappear.

Those doubting the alien visitors begin to form groups and a scientist by the name of Juliet Parrish (Faye Grant) and news cameraman Mike Donovan (Marc Singer) find themselves working together to learn more about our mysterious cosmic cousins. They discover that the visitors are in fact far from human and their planet is dying, so they're here to steal Earth's natural resources, including its human population, which is seen as little more than a food source.

"I think that's what has given it such staying power and had it become so iconic because it's that kind of timeless story that's repeated throughout history," Johnson said about the television series to Space.com.

"It's always bad guys coming in, clearly bent on blowing us up from the get-go. Not like coming in and promising you everything you need before slowly revealing their darker intentions. I think I was inspired by the Sinclair Lewis book 'It Can't Happen Here,' written in the 1930s about a grassroots rise of fascism taking over the United States, and of course it has." "I always say 'V' is like Spartacus and the revolt of the slaves, it's the American Revolution, it's apartheid. It's any situation where you have an oppressive power that dominates and manipulates a society."

There are several subtle references to the Nazi invasion of Europe in the series: the visitor's logo is similar in design to the Nazi swastika and some of the uniforms are brown in color, a reference to the Sturmabteilung paramilitary organization that aided the Third Reich.

Alien occupation is a surprisingly underused storyline in mainstream sci-fi. Since "V" aired, only two other TV shows have explored the idea: "Colony" and "Falling Skies."

The original "V" miniseries was a two-part broadcast in the summer of 1983. It was NBC's highest-rated program in two years, with 80 million viewers watching each episode and a budget of $13 million ($33 million today).

"V" also employed one of the first instances of a viral-style marketing campaign that producers like J.J. Abrams have since used to great effect. Posters appeared in train stations across the country of a smiling man behind big, '80s-style sunglasses with only the text "The Visitors are our friends" alongside him. Days later, those posters were spray-painted with a red "V" (for "victory"). Nothing suggested this was an advert for a TV show, which made the campaign that much more intriguing.

After the series aired, a sequel of sorts was made called "The Final Battle," which took the form of a three-part miniseries. A 19-part series followed, however Johnson no longer had creative control and the program's quality and the ratings steadily declined until the series was finally canceled in 1985.

"The truth is that after I left the project over Warner's breach of my contract, I just had no choice, it was handed over to other people to produce, and they ended up rewriting it and changing a whole lot of things to the point that I never read it," Johnson said.

A reboot was attempted in 2009 starring Morena Baccarin ("Deadpool"), Elizabeth Mitchell ("The Expanse") and Joel Gretsch ("The 4400"), but it  lasted only two seasons before getting canceled.

During last week's San Diego Comic-Con, there was a panel celebrating the legacy of "V" and the arrival of a brand-new, remastered edition of the original miniseries on Blu-ray. Johnson was joined by Singer on a panel about the remastered edition, and they talked not only about the impact of the series, but also about their plans to bring "V" up-to-date by turning it into a movie.

Johnson showed the crowd of devoted fans some concept art-based VFX storyboards of this proposed film and announced that Ted Field was joining the team as a producer. Among Field's lengthy list of credits, he was a producer on all three "Riddick" movies and both "Bill & Ted" movies.

"Ted came to us with a pathway and a game plan for getting the picture made the way we want to get it made," Johnson said. "And that's what we're in the process of working on," he added.

Johnson, who was a writer on "The Six Million Dollar Man," "The Incredible Hulk" and "Alien Nation," says he hopes to make “V” into a film trilogy, with the first movie being a retelling of the two-part miniseries story in a way that's much closer to his original script. Johnson said he aims for the following two sequels to focus on another element of the story that's only hinted at in the miniseries: that the alien visitors are engaged in a war with another alien species. Johnson added during the panel that Singer would return for these sequels, something that Johnson explores in the sequel novel, "V, The Second Generation."

"When audiences see the movie from the original writer/director, there's a sense that they're not going to get conned in any way. You know, it's like 'Mad Max' – but you know that George Miller's doing it, so you're, oh, OK. You know, I'll buy into that one. And I think that audiences really get the integrity that's involved in that," Johnson said.

In a rare case of exceptional forward thinking, especially for1983, Johnson shot the original miniseries in 1:85 aspect ratio. That has gone a long way in helping to bring the series up to modern, high-definition standards.

The "V" Blu-ray is multi-region and includes the original two-part miniseries remastered into 1080p high-definition, remixed audio in Dolby ATMOS, director's commentary that was on the DVD release and a behind-the-scenes featurette.

The Blu-ray is now available to pre-order from Amazon here.