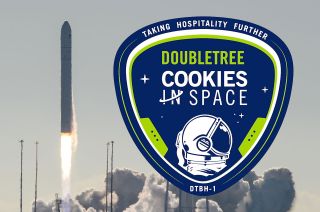 The ingredients to make sweets, space and hotel history are on their way to the International Space Station with the launch of a commercial cargo spacecraft.

The first kitchen-like oven designed for use in microgravity and the dough to bake DoubleTree by Hilton's trademark chocolate chip cookies — which are set to become the first-ever food baked in space — lifted off on Saturday (Nov. 2) aboard Northrop Grumman's 12th Cygnus capsule to resupply the orbiting laboratory.

The Cygnus launched atop a Northrop Grumman Antares rocket at 9:59 a.m. EDT (1359 GMT) from the Mid-Atlantic Regional Spaceport at NASA's Wallops Flight Facility in Virginia. The spacecraft, which was named the "S.S. Alan Bean" after the late Apollo 12 astronaut, is set to arrive and be attached to the space station's Unity node on Monday (Nov. 4).

The NG-12 launch coincided with the 19th anniversary of the start of Expedition 1 on board the space station. For almost two decades, the outpost has supported a continuous human presence in space.

Now, the Expedition 61 crew will become the first astronaut-bakers in orbit.

"Not only are our cookies the first-ever food item to be baked in space, but we are going to be the first hospitality, or hotel company to be doing anything on the International Space Station. To say that we are the first is huge for us," said Shawn McAteer, senior vice president and global head for DoubleTree by Hilton, in an interview with collectSPACE.com.

The Zero G Oven was created by the teams at Zero G Kitchen, a startup developing culinary appliances for use in microgravity, and Nanoracks, a space services company that for the past 10 years has been deploying payloads to the space station.

"When we first talked about it, we were not even sure it is possible," said Mary Murphy, senior internal payloads manager at Nanoracks, in a pre-launch press briefing on Friday. "Everyone knows how baking on the ground works, but how do you translate that to a zero-g experience?"

Since hot air does not rise in the microgravity environment of space, Nanoracks had to find another way to transfer heat to the item being baked. The Zero G Oven works by using electric heating elements placed around a cylindrical chamber, so that a pocket of heated air surrounds the food at its center.

But if you were just to place the cookie dough into the oven, it might float out of the center or tumble such that it is not evenly baked. Instead, the cookie dough, formed into a puck shape, is held within a silicone pouch with an aluminum frame that serves as a tray and a filter to allow hot air to escape but contain any crumbs.

DoubleTree by Hilton, which gives out warm chocolate chip cookies to its guests at check-in, has provided dough for five cookies to be baked in space.

"They'll have a couple up there that they can do with what they want, and then three of the cookies will come back down to Earth. Those three cookies will then be sent to NASA for further testing," said McAteer, adding that depending on their condition post-tests, DoubleTree hopes to receive back the space-baked cookies.

In addition to the oven and dough, the S.S. Alan Bean is also bringing to the space station an experimental vest to protect astronauts from radiation exposure, a Lamborghini-sourced set of carbon-fiber composites to be tested in the vacuum of space and a new plastics recycler to produce filament for the station's commercial 3D printer (both of the latter provided by Made in Space).

Also on board is a commemorative tin filled with pre-baked DoubleTree by Hilton chocolate chip cookies.

"We did not want to deprive any of the astronauts from having the opportunity to eat some freshly-baked cookies, so in addition to the dough that they're going to bake in the oven, we are sending a tin of our cookies up as part of the launch as well," Kristen Savoy, senior manager for global brand communications at Hilton, told collectSPACE.

The hospitality company, which is celebrating its 100th year since its founding, has also made the specially-designed Cookies in Space tins available for to the public and has devoted its annual cookie cookbook to space-themed recipes.

"To be able to say we're the first brand ever affiliated with anything hospitality-wise on the International Space Station and being the first ever food item to be baked in space speaks to what we're about, which is being pioneering and innovative. So it's a very big deal for us," said McAteer.