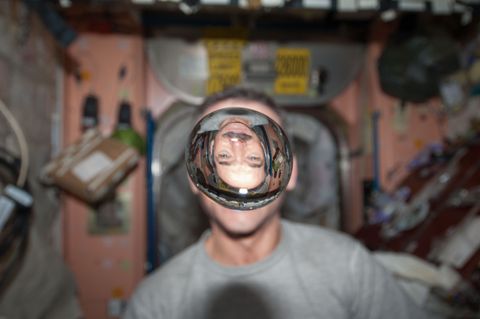 Astronauts are amazing. We all know it's true, so it is worth saying. This is a collection of some of the Space.com writer's favorite books about or written by those who risk space travel so we can progress into the future.

Reading books written by, or about, astronauts can give us an insight into this unique breed of people and can inspire those who have their eye on the stars.

This autobiography of astronaut Michael Collins, who orbited the moon alone while Neil Armstrong and Buzz Aldrin landed on the lunar surface, sets the standard for astronaut-authored memoirs and provides a definitive but personal account of Apollo 11. "Carrying the Fire: An Astronaut's Journey" has been re-released as a 50th-anniversary edition.

An astronaut's photographs from a year in space

Scott Kelly spent a record-breaking 340 days on the International Space Station, taking tens of thousands of images of the planet spinning below — making him the perfect guide to show off the wonders of Earth. This new large-format photobook combines images he took of the Space Station and Earth with super-zoomed-in views of unusual parts of the planet's surface, as well as photos of his launch, landing, and other parts of the historic mission.

The book combines large, colorful images with Kelly's descriptions of the mission and interesting Earth features, and it makes a great companion to his recent memoir "Endurance" or a good stand-alone showpiece. ~Sarah Lewin

Hello, Is This Planet Earth?

My view from the international space station

British astronaut Tim Peake's photo book takes its name from an unusual moment during his six months on the International Space Station — he tried to call his family on Christmas Eve in 2015, but dialed the wrong number instead, confusing the answerer with an unusual greeting: "Hello, is this Planet Earth?"

The book is filled with Peake's favorite photo selections of night and day, oceans and rivers, mountains and deserts,  towns and cities, and the Earth overall, as well as the satellites, cargo craft and other gear that made appearances during his time on the space station. His images are interspersed with descriptions of how he captured the photos and anecdotes about his time in space. ~Sarah Lewin

I can see my house

Around the world in 92 minutes

Chris Hadfield made a name for himself on social media during his five-month stay on the International Space Station in 2012-2013 by tweeting from space, recording humorous videos, and even playing guitar. The Canadian astronaut, like most visitors to the space station, also took innumerable photos looking back down at Earth.

In "You Are Here: Around the World in 92 Minutes," Hadfield has compiled his favorite photos into one tour over the surface of the Earth as seen from space. Besides describing what's happening in the photos, he also compares them to more commonplace sights: desert sand like the storms of Jupiter, sprinkled icing over Australia, the "Eye of the Sahara" and more.

On the heels of "An Astronaut's Guide to Life on Earth" (Little, Brown, 2013), which offers advice and anecdotes from space, this book takes a step back and lets an astronaut's view (mostly) speak for itself.  ~Sarah Lewin

Making a Home on the Red Planet

Kids can hop aboard the first expedition to Mars in "Welcome to Mars" (National Geographic Children's Books, 2015) by astronaut Buzz Aldrin, written with author, physicist and former NASA flight controller Marianne Dyson. Aldrin's tale about a trip on the "Aldrin Cycler" spaceship to Mars covers the history of Mars exploration, the steps needed to get there and the process of building out from the first tentative toehold to a permanent colony on the planet.

It's full of countless specific details — exactly what the first explorers will and won't need to bring along, the best and most entertaining modes of transportation once there and exactly why the first habitats will be round and bubble-like, to name a (very) few. The book is also peppered with hands-on activities to demonstrate aspects of the journey and the planet's conditions. This book is not Aldrin's first proposing a mission to Mars, but this one is carefully calibrated to get young, curious children excited about the prospect. ~Sarah Lewin

The Life of Neil A. Armstrong

His achievement is one of the greatest moments in humanity's history and you should, if possible, find out as much as you can about this pioneer.

I love reading books about astronauts. There is a dedication in them that most people cannot master. It takes years of constant work to even qualify and on top of all that you have to be willing to go somewhere where the risk of death is almost inevitable.

Being British, I really enjoyed reading about astronaut Tim Peake's time on the international space station and seeing all the pictures he took while he was there. Some of them even show my house, which is amazing.