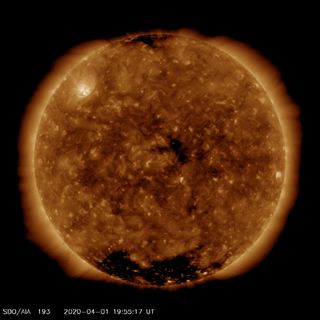 An image of the sun captured by NASA's Solar Dynamics Observatory spacecraft on April 1, 2020.
(Image: © NASA/SDO/AIA/EVE/HMI )

The sun has been awfully quiet lately, but that could change starting this month, scientists say.

You wouldn't know it without taking a good look at the sun (which, reminder, you should only do with proper eye protection), but our local star goes through cycles of activity, each lasting about 11 years. Right now, the sun is fairly calm as it wraps up what scientists dub solar cycle 24 and begins solar cycle 25.

Scientists can't predict exactly when that transition will occur, but they know it should be happening soon. "Maybe this month," Clinton Wallace, director of the National Oceanographic and Atmospheric Administration''s Space Weather Prediction Center said of the center's predictions for solar minimum during a presentation coordinated by the National Academies of Sciences yesterday (April 1). "In the next year we'll know when we've hit minimum."

Related: Our sun will never look the same again thanks to two solar probes and one giant telescope

As the sun's activity increases, more sunspots — dark, cool knots of magnetic field — will cross the star's surface. Sunspots are the origins of solar outbursts like coronal mass ejections and flares, which fling radiation and charged particles across the solar system. Around Earth, such events can cause auroras, interfere with critical satellites in orbit and sometimes knock out the power grid on the ground.

Solar cycle predictions are complicated by the fact that scientists don't know as much as they would like to about how our star actually works. The gradual shift of the sun's magnetic field causes the 11-year cycle, but the intricacies of that relationship and of phenomena like sunspots are poorly understood.

Since the last solar minimum, in 2009, scientists have gained valuable new tools for studying the sun's activity, including NASA's Parker Solar Probe, which has been dancing around the sun since 2018, and a massive new solar telescope in Hawaii that recently captured its first image.

Even with incomplete data, scientists are already trying their hand at making predictions for the upcoming solar cycle. "We'll see the peak sometime in the summer of 2025, 115 sunspots plus or minus 10 in that period," Wallace said. "It's a long-term prediction and the future will tell how well this prediction went."