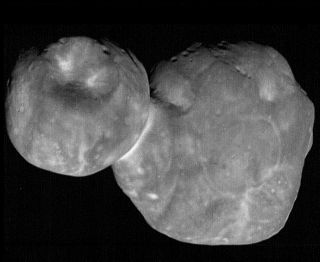 The best-ever photos of Ultima Thule have made it down to Earth, and they heighten the intrigue about the frigid and faraway world.

On New Year's Day, NASA's New Horizons spacecraft zoomed past the 21-mile-long (34 kilometers) Ultima Thule, setting a record for the most distant planetary encounter in history. (Ultima lies about 1 billion miles, or 1.6 billion km, beyond Pluto, which New Horizons flew by in July 2015.)

New Horizons has been beaming flyby data and imagery home to its handlers ever since, and will continue to do so for another 18 months. The early returns have been spectacular, revealing Ultima Thule to be a weird snowman-pancake hybrid with mysterious features, such as a bright "collar' where the body's two lobes meet. [New Horizons at Ultima Thule: Full Coverage]

"Whether these features [the pits] are craters produced by impactors, sublimation pits, collapse pits or something entirely different is being debated in our science team," New Horizons Deputy Project Scientist John Spencer, of the Southwest Research Institute (SwRI) in Boulder, Colorado, said in a statement.

The newly released images boast a resolution of about 110 feet (33 meters) per pixel. They're the highest-resolution pictures New Horizons has ever taken, and may ever take during its operational life, mission team members said.

There was no guarantee we'd ever get to see Ultima Thule — whose official name is 2014 MU69 —  in this dazzling light. Capturing the newly released images was a "stretch goal" that demanded a precise square-up of Ultima in the narrow field of view of New Horizons' telescopic camera.

"Getting these images required us to know precisely where both tiny Ultima and New Horizons were — moment by moment — as they passed one another at over 32,000 mph [51,500 km/h] in the dim light of the Kuiper Belt, a billion miles beyond Pluto. This was a much tougher observation than anything we had attempted in our 2015 Pluto flyby," New Horizons Principal Investigator Alan Stern, also of SwRI, said in the same statement.

"These 'stretch goal' observations were risky, because there was a real chance we'd only get part or even none of Ultima in the camera's narrow field of view," Stern added. "But the science, operations and navigation teams nailed it, and the result is a field day for our science team! Some of the details we now see on Ultima Thule's surface are unlike any object ever explored before."

New Horizons launched in January 2006 to lift the veil on Pluto, which had remained largely mysterious since its 1930 discovery. The Ultima Thule flyby is the centerpiece of an extended mission that runs through 2021.

New Horizons is in good health and has enough fuel to fly by yet another distant object, if NASA grants another mission extension, Stern and other mission team members have said.