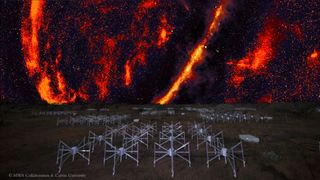 The Murchison Widefield Array (MWA) — a network of radio telescopes in the Australian outback — is scouring the skies for traces of neutral hydrogen, the last surviving molecule of the cosmic dark ages.
(Image: © © MWA Collaboration and Curtin University)

Long ago, millions of years before the first star sparked to life, the entire universe was a sea of darkness.

Beginning about 400,000 years after the Big Bang and lasting hundreds of millions of years, this so-called dark age of the universe marked the last time when empty space really was empty; no planets, no suns, no galaxies, no life — just a fog of hydrogen atoms forged by the Big Bang and left to slosh through the darkness.

Today, telescopes around the world are trying to catch a glimpse of that primal hydrogen (known as neutral hydrogen) in order to pinpoint the moment when the dark ages finally ended and the first galaxies formed. While those ancient atoms remain elusive, a team of researchers in the Australian outback may have come closer to finding them than ever before.

Related: From Big Bang to Present: Snapshots of Our Universe Through Time

According to the new study published to the preprint database arXiv and soon to appear in the Astrophysical Journal, astronomers used the Murchison Widefield Array (MWA) radio telescope to peer deep into the cosmic past in search of neutral hydrogen's signature wavelength. They didn’t find what they were looking for — however, using new settings on the telescope's recently updated array, the team determined the lowest limit ever for neutral hydrogen's signal strength.

"We can say with confidence that if the neutral hydrogen signal was any stronger than the limit we set in the paper, then the telescope would have detected it," said study co-author Jonathan Pober, an assistant professor of physics at Brown University in Rhode Island. That means that the hunt for these ancient molecules is still on, and now researchers know that neutral hydrogen's footprints are even fainter than anticipated.

The energy coursing through the early universe was so strong that every atom had its electrons ripped away, giving them a positive charge. The first of these atoms was the positively charged hydrogen ion. Over hundreds of thousands of years, the universe cooled and expanded enough for these hydrogen ions to regain their electrons, becoming neutral once again. These neutral hydrogen atoms are believed to be the dominant feature of the cosmic dark ages. (Eventually, when enough of them clumped together to form the first stars, the atoms were re-ionized again by energy radiated from those stars.)

Related: How Did the Universe Begin?

The trouble is, there are many sources (both man-made and celestial) that radiate at the same wavelength.

"All of these other sources are many orders of magnitude stronger than the signal we're trying to detect," Pober said. "Even an FM radio signal that's reflected off an airplane that happens to be passing above the telescope is enough to contaminate the data."

So, Pober and his colleagues wrote a suite of equations to identify and weed out these contaminants in their observations. After taking more than 1,200 radio wave snapshots of the sky, the researchers determined that every trace of 2-meter emissions they found came from somewhere other than the neutral hydrogen they were looking for.

While the prized atomic signal remains undiscovered, the new research succeeds in narrowing down what future searches for neutral hydrogen should look like. According to the researchers, these results make a strong case that the MWA experiments are leading this hunt down the right path. With further research, the last relics of the cosmic dark ages could soon be brought to light.