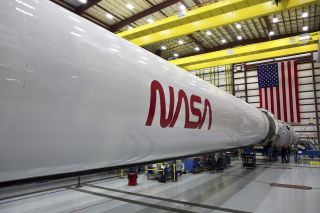 The SpaceX Falcon 9 rocket that will launch the Crew Dragon spacecraft, with NASA astronauts aboard, on Demo-2, the company's second demonstration flight and first crewed flight to the International Space Station.
(Image: © SpaceX)

If you've been suffering from worm withdrawal, relief is finally in sight.

NASA's famous "worm" logo, which was retired in 1992, is roaring back to help celebrate the return of orbital human spaceflight to American shores. The iconic, very 1970s red-text emblem has been stenciled on the SpaceX Falcon 9 rocket that will launch the Demo-2 test flight, agency officials announced today (April 2).

Demo-2, which is scheduled to lift off in mid- to late May, will send NASA astronauts Bob Behnken and Doug Hurley to and from the International Space Station (ISS) aboard SpaceX's Crew Dragon capsule. It will be the first crewed orbital trip to depart from the United States since the retirement of NASA's space shuttle fleet in 2011. (That drought doesn't extend to suborbital space, however; Virgin Galactic launched crewed suborbital test missions from California in December 2018 and February 2019.)

The worm is back! When the @SpaceX Falcon 9 lifts off carrying @NASA_Astronauts aboard #CrewDragon, it will sport the iconic symbol to mark the return of human spaceflight on American rockets from American soil. More: https://t.co/jQQv5ZcTY0 #TheWormIsBack pic.twitter.com/9Ltk1nMa8jApril 2, 2020

If Demo-2 goes well, SpaceX will be clear to start flying operational crewed missions to and from the ISS for NASA. Elon Musk's company holds a $2.6 billion contract with the space agency to complete six such missions with Crew Dragon and the Falcon 9.

Boeing has a similar contract with NASA's Commercial Crew program, which the aerospace giant plans to fulfill using a capsule called CST-100 Starliner. But it's unclear when Starliner will be ready to fly astronauts; the Boeing capsule failed to rendezvous with the ISS as planned during the uncrewed Orbital Flight Test (OFT) mission this past December, and analysis of data from that mission revealed several serious software issues that need to be addressed. (SpaceX aced its version of OFT in March 2019.)

NASA's first logo was the famous "meatball" — a blue, star-speckled circle pierced by a red chevron, along with the agency's name encircled by an orbiting spacecraft. But it was tough to print this complex symbol using 1970s technology, NASA officials said, so the sleek and simple worm, created by Richard Danne, came onto the scene in 1975.

The worm and the meatball coexisted for 17 years, until the worm was buried in the early 1990s. But agency officials have now decided that there's room for both icons once again. There's "a good chance" that the worm will be featured in multiple ways on Demo-2 and in the future, NASA officials wrote in a statement today.

"The agency is still assessing how and where it will be used, exactly," they wrote in the statement. "It seems the worm logo wasn’t really retired. It was just resting up for the next chapter of space exploration. And don’t worry: the meatball will remain NASA’s primary symbol."