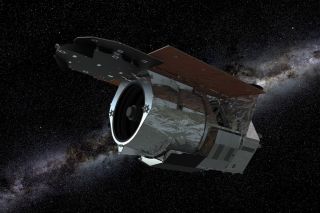 NASA's repurposed spy telescope is ready for the next stage of development.

The $3.2 billion Wide Field Infrared Survey Telescope (WFIRST) recently passed its preliminary design review, which means that it met all of the budgetary, schedule and performance requirements for the team to begin finalizing the design. If all goes according to plan, WFIRST should launch to space in the mid-2020s.

"It is an honor to work with such a dedicated and talented development team. Each individual has helped ensure the telescope is technically sound, safe and capable of carrying out compelling science," Scott Smith, WFIRST telescope manager at NASA's Goddard Space Flight Center in Maryland, said in a NASA statement. "It's exciting to picture our new telescope out in space, exploring the universe, and we look forward to pushing the boundaries of human knowledge."

Related: The Best Hubble Space Telescope Images of All Time!

In 2012, the National Reconnaissance Office offered NASA two telescopes originally built as spy devices, so that scientists could repurpose the instruments to study the world around us. The telescope is meant to give astronomers a clearer and more expansive view of the universe.

WFIRST will study the evolution of dark energy and dark matter since the Big Bang that formed our universe. Little is known about these mysterious substances, and a better understanding of them could help scientists learn more about why our universe is accelerating as it expands.

The instrument will also examine exoplanets and survey our own Milky Way galaxy to see how common the structure of our solar system is.

WFIRST boasts a 7.8-foot-wide (2.4 meters) mirror and a 300-megapixel camera. Each individual field of view in WFIRST is 100 times larger than that of NASA's Hubble Space Telescope, but with the same resolution. The telescope's primary instruments are a wide-field instrument (to examine dark matter, dark energy and exoplanets) and a coronagraph shade to directly image exoplanets by obscuring the light their host stars emit.

That coronagraph is vital, as it will let scientists study nearby exoplanets similar to those in our solar system, especially exoplanets that are similar to Earth. The coronograph will focus on planets orbiting at the equivalent of between three and 10 times Earth’s distance from the sun, according to NASA.

The latest astrophysics decadal survey, published in 2010, ranked WFIRST as the top flagship mission. Yet WFIRST's planning has taken place amid threatened cancellations in NASA's budget in both 2019 and 2020; it was restored in 2019 and is still under review for 2020. One of the main competitors for WFIRST funding is NASA's long-delayed and over-budget James Webb Space Telescope, which is expected to launch in 2021.