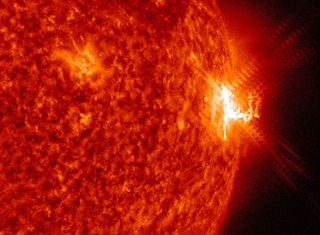 A closeup of the M7.6-class solar flare that erupted from the sun on July 23, 2016 as seen by NASA's Solar Dynamics Observatory. NASA is considering two proposals that would study space weather from the sun.
(Image: © NASA)

NASA is considering two proposals that would study space weather from the sun, which poses a radiation threat to astronauts cruising across the solar system.

These two proposals aim to use small satellites to better protect future crews by predicting how space weather affects people and their spacecraft. Each proposal will receive up to $400,000 for a nine-month study, according to NASA. NASA will pick one of the two ideas to launch with NASA's Interstellar Mapping and Acceleration Probe (IMAP), which is scheduled to fly in October 2024.

"This is the first time that our heliophysics program has funded this kind of technology demonstration," Peg Luce, deputy director of the Heliophysics Division at NASA Headquarters, said in a statement. "Providing the opportunity to mature and test technologies in deep space is a crucial step towards incorporating new techniques into future missions."

These are the two proposals:

This satellite would host two technologies. The first will use optical or laser communications, which are much faster than the traditional radio links between spacecraft and their ground stations on Earth. Laser communications also lighten the load on NASA's Deep Space Network, which coordinates communications with different spacecraft. This will become even more important as swarms of CubeSats and small satellites may explore deep space in future decades, communicating with each other and the ground.

The second technology aboard SETH will detect a variety of wave types and particles that come from the sun, including energetic neutral atoms — swiftly moving particles that don't have an electrical charge. These particles carry radiation and can be a threat to astronaut crews.

The principal investigator for SETH is Antti Pulkkinen, an aerospace technologist at NASA's Goddard Space Flight Center in Maryland.

Solar Cruiser will carry a solar sail measuring nearly 18,000 square feet (1,670 square meters) — roughly seven times larger than the average American home (2,426 square feet (225 square meters), according to 2017 U.S. Census Bureau statistics cited in Business Insider). Solar sailing would allow the spacecraft to see "views of the sun not easily accessible with current technology", NASA said in the same statement, not specifying how this might occur.

The spacecraft will also carry a coronagraph instrument to simultaneously measure the sun's magnetic field structure and the velocity of any particle explosions (or coronal mass ejections (CMEs)) from the sun's surface. CMEs, if aimed towards Earth, can interfere with satellite communications or utility grids if the storm is particularly strong.

The principal investigator for Solar Cruiser is Les Johnson, a physicist at NASA's Marshall Space Flight Center in Alabama.