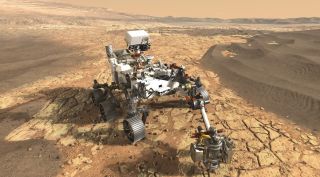 New developments in space exploration, like plans to return samples from Mars, have prompted NASA to ask an independent committee to review its planetary protection policies.
(Image: © NASA/JPL-Caltech)

In an April 23 statement, the agency said it will create an independent Planetary Protection Review Board to recommend any updates to existing regulations intended to prevent contamination of potentially habitable worlds by NASA spacecraft, or contamination of the Earth by any life that may exist on those worlds.

"It's vital we revisit the planetary protection guidelines put in place in a previous era to ensure our protection standards reflect the current and future realities of space exploration," Thomas Zurbuchen, NASA associate administrator for science, said in the statement.

Related: To Walk on Mars, We Must Get Serious About Planetary Protection

The board will be chaired by Alan Stern, a former NASA associate administrator for science who is best known as the principal investigator of the New Horizons mission that flew past Pluto and the Kuiper Belt object 2014 MU69. Stern also provides commercial expertise as a board member and former chairman of the Commercial Spaceflight Federation.

"I'm looking forward to our helping ensure that we have a set of guidelines that help enable a new era of civil, commercial, and public-private partnership exploration, while safeguarding both life on Earth and environments across the solar system," Stern said in the NASA statement.

The announcement comes after the NASA Advisory Council adopted a recommendation at its last meeting in December calling for a review of NASA planetary protection policies by an independent committee. Existing policies are based on guidelines developed decades ago by the Committee for Space Research (COSPAR), an international scientific body.

"COSPAR is a great start," said Mike Gold, chairman of the council's regulatory and policy committee, during a discussion on the topic at the December council meeting. "But clearly times have changed. There are human spaceflight missions that we couldn't have imagined before. There are private sector players that again, a decade or two ago, we wouldn't have thought possible."

At the December NASA Advisory Council meeting, officials said that any revisions to NASA planetary protection policies that stem from the committee's work could also lead to a review of COSPAR policies. Len Fisk, a former NASA official who is the current president of COSPAR, said at that meeting that he would support an update to COSPAR's guidelines based on any changes to NASA policies.

NASA hasn't yet announced the other members of the board. The committee will start meetings in late June and work for about three months.