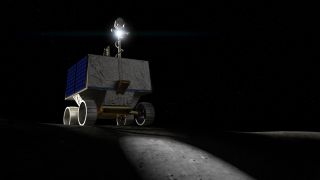 An artist's depiction of a NASA lunar rover called VIPER, which is designed to map where ice lurks under the moon's surface.
(Image: © NASA Ames/Daniel Rutter)

HOUSTON — NASA is considering developing an unpressurized rover that astronauts could drive remotely on the moon alongside a suite of robotic lunar explorers as part of the Artemis program.

In a speech Wednesday (Nov. 20) here at SpaceCom Expo, a two-day conference covering the business of space, Tom Cremins, NASA's associate administrator for strategy and plans,said such a project would be a public-private partnership that could include involvement from companies with expertise in making golf carts, all-terrain vehicles, automobiles or even autonomous mining parts. Similar rovers could be used in future crewed Mars missions as well.

Cremins said he would like the rover ready to operate "when the first crews arrive" (which NASA hopes will be in 2024) and allow for astronauts to operate it remotely from as far away as the planned Gateway station in lunar orbit. This rover would be used "to conduct operations and to add to the science objectives," he said.

Driving on the moon

The unpressurized exploration rover was also mentioned in late October at the annual meeting of the Lunar Exploration Analysis Group, a group of scientists that supports NASA in identifying priorities and issues for moon exploration.

Once astronauts are on the surface, robotic exploration is a key strategy for expanding the range of terrain astronauts can view, NASA's John Connolly, lunar systems lead for the agency, said last month. People can only range about 1.8 miles (3 kilometers) from their lander, due to oxygen constraints. Robots have no such requirements, so they are essential if the agency is to meet its science goals on the moon.

"We're, no kidding, planning what we're going to do during those missions," Connolly said in his talk, which was archived on YouTube. For the first Artemis moon-landing mission in 2024, the agency plans a 6.5-day mission in the Shackleton Crater area with two crewmembers on the surface, he said. These astronauts will remotely drive a 440-lb. (200 kilograms) unpressurized rover and several handheld instruments to sample water ice from chilly, permanently shadowed craters.

But robots will beat humans to the moon.

NASA is drawing up plans for a suite of robotic helpers that will tackle lunar exploration tasks before and alongside the astronauts the agency intends to land on the moon in 2024.

The agency will send several landers and rovers to the surface through its own efforts and those of commercial partners, Steven Clarke, NASA's deputy associate administrator for exploration, said here at SpaceCom, a two-day conference covering the business of space.

One key target is water ice, because the compound could be turned into drinking water or rocket fuel. Multiple missions have studied ice on the moon, including India's Chandrayaan-1 moon orbiter, which helped confirm its existence; and the ongoing NASA Lunar Reconnaissance Orbiter, which has mapped ice locations in high definition. But it's still unclear how that ice could shape exploration activities.

One rover that will pave the way for humans is called Volatiles Investigating Polar Exploration Rover (VIPER). The VIPER moon rover will help NASA learn about the abundance and location of water ice. VIPER's instruments will include spectrometers to hunt water ice and a drill to burrow into the lunar surface, Clarke said. "These instruments are going to do that ground proofing we are talking about."

About the size of a golf cart, VIPER is expected to cost about $250 million. NASA has not yet decided which commercially provided lander will carry the rover to the moon, but expects VIPER to arrive in December 2022 for a 100-day mission.

Those commercial partners are a crucial part of NASA's moon strategy, Clarke said. CLPS will let the agency rapidly deploy its spacecraft to locations all over the moon, helping NASA find the most promising locations to send humans.