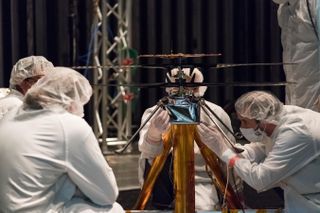 "Gearing up for that first flight on Mars, we have logged over 75 minutes of flying time with an engineering model, which was a close approximation of our helicopter," Mars Helicopter project manager MiMi Aung, of NASA's Jet Propulsion Laboratory (JPL) in Pasadena, California, said in a statement.

"But this recent test of the flight model was the real deal," she added. "This is our helicopter bound for Mars. We needed to see that it worked as advertised."

The test took place in January in the Space Simulator, a 25-foot-wide (7.62 meters) vacuum chamber at JPL that has helped prep many robotic planetary explorers over the decades. Aung and her colleagues configured the chamber to mimic the wispy, carbon-dioxide-dominated Martian atmosphere, which is just 1 percent as thick as that of Earth.

The team also outfitted the helicopter with a "gravity offload system" — a motorized lanyard that pulled upward on the craft continuously so that it experienced Mars gravity during flight. (The gravitational pull on the Red Planet's surface is just 40 percent as strong as the tug we feel here on Earth.)

The results were encouraging, to say the least.

"The gravity offload system performed perfectly, just like our helicopter," Mars Helicopter test conductor Teddy Tzanetos, also of JPL, said in the same statement. "We only required a 2-inch [5 centimeters] hover to obtain all the data sets needed to confirm that our Mars helicopter flies autonomously as designed in a thin, Mars-like atmosphere; there was no need to go higher. It was a heck of a first flight."

The helicopter performed similarly well in a second test the next day, project team members said. So, the little drone is ready for the Red Planet — and its place in history as the first craft ever to ply the skies of an alien world.

"The next time we fly, we fly on Mars," Aung said. "Watching our helicopter go through its paces in the chamber, I couldn't help but think about the historic vehicles that have been in there in the past. The chamber hosted missions from the Ranger moon probes to the Voyagers to Cassini, and every Mars rover ever flown. To see our helicopter in there reminded me we are on our way to making a little chunk of space history as well."

The solar-powered helicopter will launch with NASA's 2020 Mars rover, a car-size robot that will search for signs of ancient Red Planet life, collect and cache samples for eventual return to Earth, and perform a variety of other science work.

At some point after Mars 2020's February 2021 touchdown inside Jezero Crater, the little chopper — which sports two 5.9-foot-long (1.8 m) rotors — will drop from the rover's belly onto Mars' red dirt. The helicopter will then make a handful of test flights, each lasting a maximum of 90 seconds.

The main goal is to show that little drones can indeed explore Mars from the air. Success could pave the way for ambitious future missions that involve fleets of helicopters doing scouting activities for rovers or conducting science work on their own, NASA officials have said.