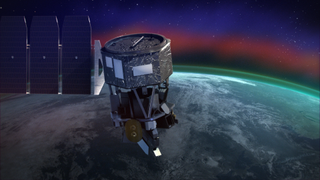 NASA hopes that the long-delayed launch of a space weather mission called ICON will finally occur tonight (Oct. 9) — but terrestrial weather concerns may scrub the flight.

The mission, formally known as the Ionospheric Connection Explorer, isn't boarding any old rocket: The spacecraft is packed up on a rocket tucked into an airplane. The plane will take off from Cape Canaveral Air Force Station in Florida, climb to an altitude of more than 39,000 feet (nearly 12 kilometers), and, around 9:25 p.m. EDT (0030 GMT on Oct. 10) drop the rocket and begin the launch procedure.

You can watch the launch on Space.com courtesy of NASA TV or directly through NASA's website beginning at 9:15 p.m. EDT (0015 GMT on Oct. 10). The launch window will last about 90 minutes; if the spacecraft isn't deployed during that time frame, similar opportunities are available on Thursday and Friday (Oct. 10 and 11).

If all goes well, the ICON spacecraft will give scientists a new look at one of the most mysterious regions of Earth's atmosphere, where traditional weather and space weather interact. Space weather reflects the environment around Earth and can be affected by, for example, massive bursts of radiation or plasma from the sun.

"The ionosphere is continually changing, and it's very, very dynamic," Nicola Fox, head of NASA's Heliophysics Division, under which this mission falls, said of the ionosphere during a press conference held yesterday (Oct. 8). "It's a place that really interesting physics is going on, it's kind of like having a plasma lab in our backyard: Just a few hundred miles up and we get to that lab."

Space weather is a key research area for NASA because the phenomena it encompasses can interfere with satellite operations and pose a danger to astronauts exploring beyond Earth. The more thoroughly scientists can understand space weather and its effects, the more accurately they can predict changes in these phenomena, which in turn can keep satellites and astronauts safer.

But the ICON mission, which NASA has been working on since 2013 and which has fallen within a $252 million cap for NASA costs, has struggled to get off the ground, with delays that total two years. Most recently, the launch was delayed from October 2018 after Northrop Grumman, which runs the L-1011 Stargazer aircraft and Pegasus XL rocket, noticed some anomalies in test data.

And during tomorrow's launch window, the weather poses a 70% chance of interfering with the launch. "I wish I had some better news," Will Ulrich, of the 45th Space Wing weather office, which monitors conditions for Cape Canaveral launches, said during yesterday's press conference.

If the launch is delayed by 24 hours, the chance of weather interfering falls to 40%.

ICON heads to space on Wednesday evening! Mark your calendar for live ICON coverage on https://t.co/U8T7pZsiWZ. #NASAICON🛰 Tuesday, Oct. 8, 1pm ET: Tune in for the mission briefing from @NASAKennedy.🚀 Wednesday, Oct. 9, 9:15pm ET: Join us for coverage of the launch! pic.twitter.com/eeWjJ8Oa0eOctober 7, 2019