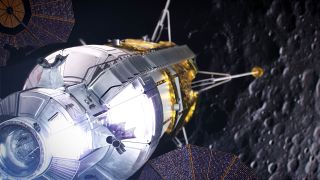 An artist's depiction of a lander carrying humans to the surface of the moon.
(Image: © NASA)

NASA has a plan to put humans on the moon in 2024: Launch astronauts to a moon-orbiting station, then use a commercially built lander to ferry them to the surface. But who will build the lander?

Today (April 30), NASA chief Jim Bridenstine will announce the companies that will compete to design that lander at 1 p.m. EDT (1700 GMT) during a news teleconference that you can watch it live here and or directly on NASA's website. The initiative is part of the agency's Artemis program, for which President Donald Trump mandated the 2024 landing date.

NASA has previously said that the 2024 mission will ride the human lander that is completed first from among the contestants announced today, with a 2025 mission going to the second completed lander. Applications to join this selection pool were due in November 2019.

Related: NASA unveils plan for Artemis 'base camp' on the moon beyond 2024

During the event, Bridenstine will be joined by Doug Loverro, associate administrator of NASA's Human Exploration and Operations Mission Directorate; Lisa Watson-Morgan, program manager for the human landing systems program; and Tyler Cochran, contracting officer for the program.

Two companies publicized their submissions during the entry period. Space hardware behemoth Boeing is already building major portions of the NASA Space Launch System rocket that will send astronauts to the moon, as well as the crew capsule Starliner that is completing the testing process for flights to the International Space Station. Upon submitting the design, Boeing said its focus was on avoiding building more complexity into the Artemis program.

The second known entrant is Blue Origin, the private spaceflight company created by Amazon founder Jeff Bezos. The company has so far focused on suborbital flights with its New Shepard rocket and spacecraft; to date these missions have been uncrewed. Blue Origin recruited three additional companies, Draper, Lockheed Martin and Northrop Grumman, to join the team; all three companies have long histories in spaceflight. The coalition will support Blue Origin's proposed lander, a variant on the uncrewed Blue Moon lander the company announced in May 2019.

NASA's current model of commercial partnerships relies on recruiting companies to submit concepts for a specific class of mission — in this case, landing humans at the moon's south pole. The selected companies aren't guaranteed any flights; today's announcement simply flags which companies will be considered eligible to take part.

The agency is using the same model for cargo deliveries to the moon through its Commercial Lunar Payload Services program. NASA has contracted with companies for the first two missions in that program, in which agency payloads are due to fly next year on cargo landers developed by Astrobotic and Intuitive Machines.