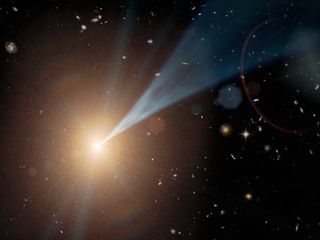 This visualization shows a jet blasting from a black hole near the speed of light. When objects reach near lightspeed, time behaves very strangely.
(Image: © NASA/JPL-Caltech)

We don't understand the concept of time much at all.

Everyone experiences time — literally every day — but rigorous and comprehensive understanding of the topic is … lacking. Then again, we do know some things, especially when we look at time through the lens of special and general relativity. Einstein's work taught us many things: that space and time are connected, that you can never travel faster than light, that our universe has a finite age and that different observers experience different lengths of time.

All these revelations lead to some interesting questions. It's time (pun intended) for a roundup.

How old is the universe?

Our universe is 13.77 billion years old, according to our current best estimates, which are very good, thank you very much. But when special relativity is invoked, we also understand that everyone measures time differently, depending on their speed. We, on Earth, whizzing around the sun, with the sun spinning around the Milky Way, and the Milky Way blasting through the intergalactic vacuum, should have a different perspective on the flow of time than someone else on a different planet around a different sun in a different galaxy. That said, how can we possibly pin down a "real" age of the universe?

Our universe expands with time. It was smaller in the past, and it will be bigger in the future. There's a direct connection between a particular moment in time and a particular size of the universe. This allows us to construct what amounts to a universal clock, a timepiece that has been ticking away for over 13 billion years.

Moving clocks run slow. The faster you move in space, the slower you move in time. This is one of the most amazing results from Einstein's special relativity theory, and it's one way of visualizing the unique relationship between time and space. This "time dilation" effect is totally unnoticeable at speeds you'll typically encounter (hopefully) in everyday life. It's only once you get up close to the speed of light that time seems to go a little wonky.

So, if time slows down for you the faster you get to the speed of light, what about light itself? It's moving at the maximum posted speed limit of the universe. Does light … not experience time at all?

Kind of, but also not quite. Our knowledge of the relationship between time and space rests in what's wrapped up in special relativity. And while the theory produces all sorts of crazy results, it's grounded in some very simple ideas, the most important of which is the concept of the universality of physical laws: What goes for one observer, at a fundamental level, goes for all.

And one thing we know in physics, via Maxwell's equations, is that the speed of light is constant. Every observer, no matter their speed, will measure the exact same speed for light.

So, if we want to apply our knowledge of special relativity to movement at the speed of light, we run into a little sticking point. In order to ask the question, "How does light experience time?" you have to put yourself in a frame of reference that rides along with a beam of light. But in that frame of reference, light would appear to be stationary to you.

The end result of all this twisting? It's not so much that light doesn't experience time. It's that our very concept of time doesn't even apply to light.

Light doesn't even know what time is.

Which twin is right?

One twin jets off close to the speed of light. The other stays at home. The faster of the pair blasts around the galaxy, having a ball, before returning to the boring ball of Earth. The other … does laundry.

According to the rocket twin, maybe a few weeks or months elapsed on ship time. A long trip, for sure, but nothing serious. But the ground-bound twin suffered years, even decades, of agonizing solitude.

This part's not surprising. Moving clocks run slow and all that. According to the twin left on Earth, the rocket twin moved close to the speed of light — and thus had a slower clock.

But wait. The twin on the rocket could rightly claim that they were the stationary one, and the whole universe, including the Earth twin, were the ones to move. Relativity is relativity, after all. Nobody's perspective is especially special. So according to that twin, the one on Earth should've barely aged at all.

Who wins the age argument?

The lonely, unadventurous, Earth-bound twin does, and they do because they didn't turn around. As long as the rocket-loving twin stayed moving in a single direction, their perspectives were exactly symmetric, with each having their own unique perspective that they could rightly call correct. But once that rocket slowed, stopped and reversed, the symmetry broke. Their perspectives were no longer mirrors. The twin on the rocket would see the horrible reality catch up to him in a blink: The Earthbound twin had aged, too much, and there was nothing they could do about it.

Learn more by listening to the episode "Does Light Experience Time? (And Other Mysteries)" on the Ask A Spaceman podcast, available on iTunes and on the Web at http://www.askaspaceman.com. Thanks to Kandi M., Mihail E., Men B., Carlos D., Alan P., Derrick M., Rose J., Kirk B., Rueben F., Chris F., Diego S., and R. S. for the questions that led to this piece! Ask your own question on Twitter using #AskASpaceman or by following Paul @PaulMattSutter and facebook.com/PaulMattSutter. Follow us on Twitter @Spacedotcom and on Facebook.