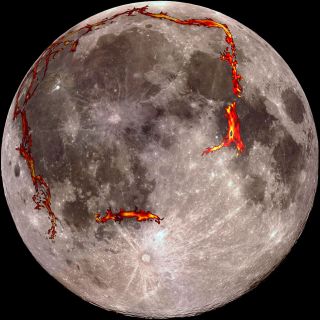 The full moon as seen from the Earth, with the Ocean of Storms (Oceanus Procellarum) border structures superimposed in red. Scientists now think this huge feature on the moon was formed by lunar lava early in the moon's formation, and not a cataclysmic impact. New research shows that there could could be active tectonic systems on the moon today.
(Image: © Kopernik Observatory/NASA/Colorado School of Mines/MIT/JPL/Goddard Space Flight Center)

The moon isn't "dead" after all. Newly discovered ridges on the moon's surface are leading scientists to think that the moon might have an active tectonic system.

Using data from NASA's Lunar Reconnaissance Orbiter (LRO), researchers have discovered a number of ridges with exposed bedrock, free of lunar regolith, or powdery lunar "soil," spread across the moon's nearside surface. These ridges, speckled with boulders, could be evidence that, not too long ago, tectonic activity broke apart the moon's surface.

While most of the moon's surface is covered in lunar regolith, there are a few, rare patches of this exposed bedrock. But, because regolith builds up quickly on the surface, there must be something creating these ridges with exposed bedrock on the moon, Peter Schultz, a professor in Brown University's Department of Earth, Environmental and Planetary Sciences and co-author of a new study describing the findings, said in a statement.

Related: Moon dust could be a problem for future lunar explorers

While ridges with exposed bedrock have been seen before, they could be explained by evidence showing that lava once flowed there, its weight and movement creating the ridges, Schultz added. But in this new study, ridges have been found that can't be explained by ancient volcanic activity and seem to be related to more recent tectonic activity. "The distribution that we found here begs for a different explanation," he said.

"There's this assumption that the moon is long dead, but we keep finding that that's not the case," Shultz said in the same statement. "From this paper, it appears that the moon may still be creaking and cracking — potentially in the present day — and we can see the evidence on these ridges."

To make these observations, the team — led by Adomas Valantinas, a graduate student at the University of Bern in Switzerland who conducted this research while a visiting student at Brown — used the LRO's Diviner instrument, which measures the temperature on the moon's surface. Diviner data allowed them to determine what types of rocks and what types of surfaces lay in specific areas because areas covered in lunar regolith tend to be colder than exposed areas of bedrock free of regolith.

Using these observations, the team was able to spot 500 patches of exposed bedrock on narrow ridges across the moon's surface near the lunar maria (large dark patches on the moon). Valantinas and Schultz mapped out all of these exposed ridges, and it turns out that they line up perfectly with ancient cracks in the moon's crust spotted by NASA's GRAIL mission in 2014. Magma once flowed through these cracks to the moon's surface.

"It's almost a one-to-one correlation," Schultz said. "That makes us think that what we're seeing is an ongoing process driven by things happening in the moon's interior."

Schultz and Valantinas suggest that what they've found is an Active Nearside Tectonic System, or ANTS for short. Within this system, they suggest that the ridges that sit above the ancient cracks found by GRAIL are still today moving upward, with their surface cracking and allowing regolith to fall into cracks leaving the bedrock exposed.

They think that ANTS may have begun billions of years ago when the moon experienced a significant impact, because regolith usually covers the surface quickly. But such activity could still be going on today, continuously pushing the ridges up, cracking them and leaving the bedrock exposed, the researchers said.

"Giant impacts have long-lasting effects. The moon has a long memory. What we're seeing on the surface today is testimony to its long memory and secrets it still holds," Schultz said.

The new study,  which was published April 13 in the journal Geology, isn't the only evidence for recent tectonic activity on the moon. For example, seismometers installed on the lunar surface by Apollo astronauts in the late 1960s and early 1970s picked up numerous quakes, which scientists have traced to the moon's long-term cooling. This cooling causes shrinkage, which in turn causes the brittle lunar crust to crack and shake.