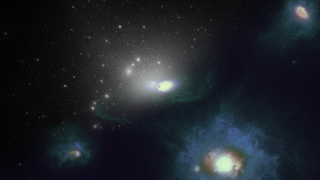 Looks like the Milky Way filched from one of its neighbors in the ancient past.

Our home galaxy stole several dwarf galaxies that used to belong to the Large Magellanic Cloud (LMC), a galaxy near the Milky Way. And it all happened because of an ongoing merger between these galaxies, which is a common process in our universe.

The discovery of the theft came courtesy of new data from the Gaia space telescope, an ongoing European mission that will precisely measure the movements of a billion stars all told. Those observations include data about the current movements of several nearby galaxies.

Related: 3D Map of the Milky Way Is the Best Yet of Its Warped, Twisted Shape

So a team of researchers compared that information with simulations that played out these movements over long periods. The comparison suggested that four ultrafaint dwarfs and two other dwarf galaxies (known as Carina and Fornax) used to be part of the LMC. But the Milky Way, a larger galaxy, managed to tear the LMC apart with its more powerful gravitational field.

In cosmic terms, the theft didn't happen all that long ago. The galaxies came over to the Milky Way's side only about 1 billion years ago, a mere fraction of the 13.8 billion-year age of the universe.

"If so many dwarfs came along with the LMC only recently, that means the properties of the Milky Way satellite population just one billion years ago were radically different, impacting our understanding of how the faintest galaxies form and evolve," lead author Laura Sales, an astronomer at the University of California, Riverside, said in a statement.

Results of the study were published Sept. 5 in the Monthly Notices of the Royal Astronomical Society.