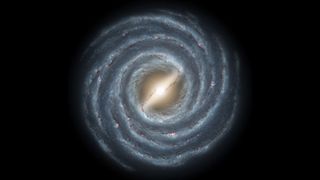 Our Milky Way galaxy was born in violence and scientists are still piecing together a picture of the cosmic crime scene.

A crucial tool in that process is the European Space Agency's Gaia space telescope, an instrument working to pinpoint the location of more than 1 billion stars. The information it gathers is letting astronomers understand how the Milky Way absorbed a second galaxy in the early days of the universe, a continuing process that's the subject of a paper published last week.

"Until now all the cosmological predictions and observations of distant spiral galaxies similar to the Milky Way indicate that this violent phase of merging between smaller structures was very frequent," Matteo Monelli, an astronomer at the Institute for Astrophysics in the Canaries and a co-author of the article, said in a statement. But scientists are still sorting out what happened to build the galaxy we know and love.

That's where the ever-growing stash of Gaia observations came into play. The telescope's location observations let scientists wind the clock back on where all those stars have been traveling, and Gaia can also study the stars' composition.

Astronomers had already seen that one batch of Milky Way stars seemed bluer than another group, marking two different ancestral galaxies within today's structure. Gaia data made the new research possible, letting a team of astronomers determine that these two groups are about the same age — and that all of these stars are older than the ones in the Milky Way's disk. The new research also suggested that while one batch of older stars are predominantly hydrogen and helium, the other batch contains larger amounts of heavier elements.

The new research is described in a paper published July 22 in the journal Nature Astronomy.