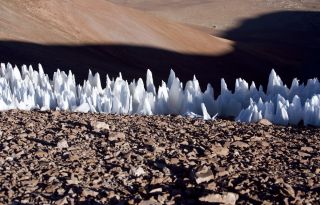 Penitentes as seen in the ultra-dry Atacama Desert in Chile.
(Image: © ESO)

The Atacama Desert in northern Chile is the driest place on Earth, where life of any kind is sparse. However, a closer look at microbial life in the vast, hot desert could provide clues as to how microbes might spread across the surface of Mars.

Atacama has long served as the best Earth analogue for Mars' harsh environment, and scientists have often used this desert to study the possibility of life on the Red Planet. A recent study found that microbes traveled within dust particles across the Atacama Desert, carried by the wind from remote locations.

"We wanted to see how microbial life is able to come to this place in the first place, how it started here," Armando Azua-Bustos, a research scientist at the Department of Planetology and Habitability in the Center of Astrobiology in Madrid and lead author of the study, told Space.com

Related: The Search for Life on Mars (a Photo Timeline)

Azua-Bustos said he considers the desert to be his childhood home, having grown up and lived in northern Chile for 20 years, which he said gave him an advantage over other researchers studying Atacama.

Even though he spent several years studying the desert and its implications for Mars, Azua-Bustos said the findings of his most recent study still surprised him. "In a place well known for containing very low microbial life, I suspected that we would not be able to find very much of it across the desert," he said.

The findings suggest that microbial life can in fact move across the driest of deserts efficiently and spread across such a region's surface.

"We realized that life was using dust as a transport, being driven by the wind," Azua-Bustos said.

The researchers suggested that microbial life on Mars could also spread across large distances, despite the planet's extreme dryness, through the winds and dust storms that cover the entire Martian surface.

Additionally, humanity may have also been sending microbes from Earth to Mars through the different landers and rovers exploring the Red Planet, Azua-Bustos said.

Although the Atacama Desert serves as the closest comparison to Mars, some are skeptical of how much these findings apply to the planet.

"I think their results are quite intriguing for the Atacama Desert … [but] Mars, of course, is still a notch more extreme," Dirk Schulze-Makuch, professor for astrobiology and planetary habitability at Technical University Berlin, told Space.com.

Schulze-Makuch said he agrees that the desert resembles Mars in its extreme dryness, high ultraviolet radiation and types of soils. However, he added that Mars has a much harsher environment.

"Furthermore, on Earth, of course, you have great sources of microbes, places on the coast or the oceans where microbes can reproduce and multiply," Schulze-Makuch said. "Where would those sources be on Mars? Not on the surface and not today."

However, the study does note that this process of microbial life transfer may have occurred more easily in Mars' early life, about 4 billion years ago, when the planet was not as dry as it is today and its environment was not as hostile.

The study's author Azua-Bustos said the findings serve as an example of life's resiliency, whether on Earth or Mars. "We were not expecting that life would be able to survive in such an environment in the first place," he said. And yet we found "that it was able to colonize and grow in different places."

The study was published in the journal Scientific Reports on Thursday (Aug. 22).